A Guide to Hef's Girls Through the Years 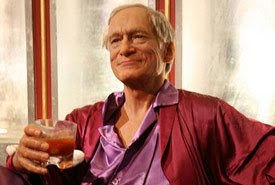 News broke this week, that Hugh Hefner has kicked his 20-year-old twin girlfriends, Karissa and Kristina Shannon, to the proverbial Playmate curb. Don't feel too bad for the blondes, though. They get to frolic in the Playmate house down the street and do promos for Hef's pinup dynasty.

And who knew Hugh was such a techno geek? He announced the news by Tweet saying, "The Shannon Twins are growing up. They're moving to the Playmate House with my blessing so they will be free to do other things."

He also claims his relationship with his third partner Crystal Harris, is getting "more serious." But, before you get too settled in, Crystal, remember this — Hef has shown us time and time again that he's good at loving the ladies and then moving on. Take a look at some of the women he's wooed over the years.


Barbi Benton
Back in 1968 it was only kind of creepy that 42-year-old Hugh Hefner was dating an 18-year-old. But when a teenage extra named Barbara Klein started "acting" like Hef's girlfriend during episodes of the series "Playboy After Dark," she soon found herself cast in the real-life role, too. Her new beau suggested she change her name to Barbi Benton, and a '70s pop-culture icon was born. Benton went on to star in such B-movies as "The Third Girl from the Left" and "Deathstalker." She also appeared on the TV shows "Hee Haw" and "Marcus Welby, M.D.," headlined in Vegas, and recorded eight albums. But contrary to popular belief, she was never a Playboy Playmate or Bunny -- although she was featured in pictorials and on the magazine's cover. She had an eye for real estate, too: she helped Hugh go house-hunting and find the not-so-little property that would become the Playboy Mansion. Yes, Hef and the '70s were good to Barbi, but when she finally figured out he wasn't going to settle down and start a family, she left the man and the mansion and married real estate developer George Gradow. After continuing to drop by shows like "CHiPs" and "Fantasy Island," the mother of two turned her back on Hollywood to become an interior decorator.

Sondra Theodore
Sonda Theodore was a Sunday school teacher turned Playmate of the Month (July 1977). No wonder she liked Hef so much -- he was the exact opposite of her data sheet turnoff: "People who don't live their lives to the fullest, who never reach for what's around the corner." She lived with Hef in the late '70s and was a member of the "Singing Playmates." But her real claim to fame is that she's one of the lovely ladies (the other is Patti McGuire) portrayed with Hef on the 1978 Playboy pinball machine.

Shannon Tweed
Who'd have thought that the daughter of a mink farmer from St. John's, Newfoundland, would end up on the pages of Playboy? A Canadian TV series called "Thrill of a Lifetime" helped make Shannon Tweed's dreams of Playboy stardom come true. The show arranged for Shannon to pose for the famous men's magazine, and she became Miss November 1981. Her then-boyfriend, Hugh Hefner, also dubbed her 1982's Playmate of the Year. Shannon left Hef to pursue her acting career, but luckily for Gene Simmons they stayed in touch. The heavy metal frontman met the erotic actress at one of the mansion's Midsummer Night's Dream parties, and the two have been living together in unwedded bliss since 1985.

Carrie Leigh
Playboy Playmate Carrie Leigh was 19 years old when she moved into the Playboy Mansion to live with boyfriend Hugh Hefner (who was then 56). Their roller-coaster romance lasted five years and suffered a string of dark times, including the Meese Commission pornography investigation, the death of Playmate Dorothy Stratten, Playboy Clubs shuttering across the country, and Hef's stroke in 1985. But Hef was still not prepared for the end when Carrie dumped the millionaire over the phone and then slapped him with a $35 million palimony suit. Carrie eventually dropped the litigation, but we wonder if she was still trying to get at Hefner when she launched "Playboy" competitor "Nude" magazine in 2008.

Kimberly Conrad
1989 was a good year for Kimberly Conrad: the former Miss January 1988 was named Playmate of the Year AND she ended Hugh Hefner's 35-year bachelor spree by marrying the ultimate playboy. They were together for nine years and had two sons (Marston and Cooper) before splitting. But they never divorced and remain married, living in separate side-by-side houses, to this day.

Brande Roderick
Hugh Hefner met actress Brande Roderick at L.A. hot spot the Opium Den, and she quickly became his number one -- but not only -- girlfriend. About a month later, at another local haunt called the Garden of Eden, Hef met twins Sandy and Mandy Bentley, who along with Brande (and later Jessica Paisley) became the Foursome. Brande was named Playmate in April 2000, but she still wanted to act. So she left the mansion to join the cast of a way-more-sophisticated production: "Baywatch." In 2001 she was the first of her beach bunny co-stars to be named Playmate of the Year. More acting gigs followed until Brande took on her most challenging role: proving her business savvy on Donald Trump's "Celebrity Apprentice." The brainy beauty came in third but was still the target of Joan and Melissa Rivers' dumb blonde rants.

Tina Jordan
Tina Jordan just couldn't find her niche in life. She seemed to try everything -- college, business school, cosmetology, loan processing -- but nothing clicked. Fate led her to meet Hugh Hefner, who moved the single mother into his Bel Air palace and made her Playmate of the Month in March 2002. Since splitting with Hef, she's appeared on "The Surreal Life," had her own radio show (called "Two Chicks and a Bunny," with Casey Kasem's daughter, Kerri), and shot a pictorial for the paintball magazine "Splat."

Holly Madison, Kendra Wilkinson, and Bridget Marquardt
Holly Madison had been going to parties at the Playboy Mansion for a year when Hugh Hefner finally asked her out on a date, and ultimately, invited her to be his number one girlfriend. Bridget Marquardt had a couple of failed test shoots for a Playmate slot and was rejected from the mag but welcomed into Hef's house. Kendra Wilkinson met Hef when she was a body-painted model at his 78th birthday party (she was 18). And so goes another typical story of boy meets girl meets girl meets girl. But they did not live happily ever after. The love quadrangle broke up in 2008. There have been rumors (which he's denied) that Hefner wanted his number one squeeze Holly back. And once her stint in the topless Vegas review "Peepshow" inevitably tanks, maybe she'll go hopping back to him. Bridget's too busy jaunting around the world's beaches to return to the magazine magnate. And there's definitely no shot of reuniting with Kendra. She married her football star fiance, Hank Bassett, and they now have a baby.