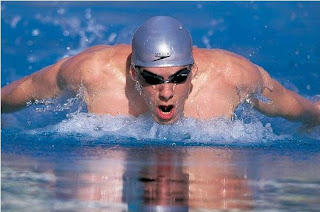 Michael Phelps is five for five…for five. Five races. Five golds. Five world records. He’s already surpassed Mark Spitz and four others as the greatest Olympian of all time, winning 11 golds to their nine. With one more world record, he bests Spitz for the most individual world swimming records (Spitz has 25). And with three more wins, he beats Spitz’s, seemingly unbeatable, most golds in one Olympics (Spitz got seven in ’72). It makes us wonder two things. One, if Spitz was competing in today’s aero-dynamic, shaved-body world of swimming, what would he achieve without that moustache? Two, why the heck isn’t Spitz in Beijing to watch Phelps take him on? Answers: the world will never know and the IOC didn’t bother to invite him. Talk about adding insult to injury!

Written by Amy & Nancy Harrington
Originally for GetBack.com
Posted by Pop Culture Passionistas at 11:42 AM