Should Old Aquaintence (and His New Partner) Be Forgot 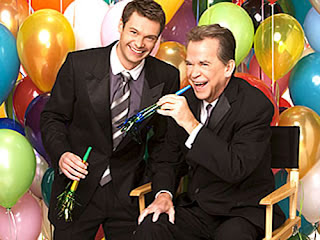 New Year's Eve. Should old acquaintance be forgot...but it's impossible to think of the Champagne soaked holiday without thinking of the world's foremost acquaintance, Dick Clark. We don't really know him. We don't even know how old he is. But every year, a lot of us (admit it you don't go out on New Year's Eve either!), curl up in their PJs with a glass of bubbly and ring in the New Year with Dick Clark's Rock 'N' New Year's Eve. Unfortunately Ryan Seacrest joined Dick as co-host in 2005, so we're embracing a new tradition - the 2nd Annual New Year's Eve Live with Anderson Cooper and Kathy Griffin. Hopefully the only thing she'll be knockin' out of people's mouths this year will be noisemakers.
Posted by Pop Culture Passionistas at 12:00 AM