What's Next for the Stars of Canceled Fall Shows? 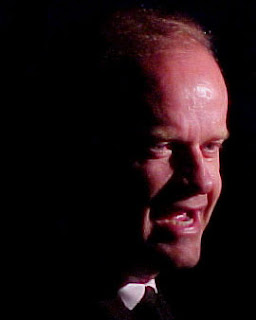 Kelsey Grammer's latest TV series, "Hank," was one of the first casualties this fall, canceled after only seven episodes aired. But don't worry about the star of "Cheers" and "Frasier" — he landed on back his feet after his last failed sitcom, "Back to You."

But this time, Kelsey will be landing on his twinkle toes, as he hopes to make a triumphant return to Broadway, playing Georges, the St. Tropez nightclub owner/emcee in "La Cage aux Folles." He'll croon such tunes as "We Are What We Are" and "Song on the Sand." It's where he belongs. And who knows? If his Broadway run is a long one and enough people see him doing something completely different, maybe he can finally break free of Frasier Crane and come back to TV to try again.

Kelsey's not the only actor to be unemployed after fall TV cancellations. Here are some of the others looking for work and what they have lined up next.


Will Arnett — "Sit Down, Shut Up"
"Sit Down, Shut Up," which was added to Fox's Animation Domination lineup in April, served as a reunion of sorts. Creator Mitch Hurwitz (who also was the brilliant mind behind "Arrested Development") brought together "AD's" Will Arnett and Jason Bateman to voice the lead characters. He also invited Kristen Chenoweth, Will Forte, Cheri Oteri, Henry Winkler, and SpongeBob himself, Tom Kenny. Sadly, the show did not live up to its big-name status and was canceled after 13 episodes. But Will Arnett, the hardest working man in show business, is not lacking for work. He has numerous movies in the pipeline, including "Jeff the Demon," "The Ambassador," and "Space Invader." And, of course, there's the long-awaited "Arrested Development" feature film, currently in production for 2011 release. But if you need an Arnett fix sooner than that, tune in to his wife Amy Poehler's show, "Parks and Recreation." In January he'll be doing a guest spot as an MRI technician and possible love interest for Leslie.

Jason Bateman — "Sit Down, Shut Up"
Jason Bateman was the other "Arrested Development" alum who lost a job when "Sit Down, Shut Up" was canceled. And while you wait for Jason and Will to rejoin the rest of the "AD" cast for the upcoming movie, you can see him in two other upcoming films. First up: "Paul," a sci-fi buddy flick with Simon Pegg, Nick Frost, Seth Rogen, and Sigourney Weaver. Then comes "The Baster," a romantic comedy with Jennifer Aniston. We're not sure that will be enough Jason to keep us satisfied until the return of Michael Bluth, but it will have to do.

Rebecca Romijn — "Eastwick"
The TV show "Eastwick" was a risky proposition: a series based on an extremely successful movie with some of Hollywood's biggest players — Jack Nicholson, Cher, Susan Sarandon, and Michelle Pfeiffer. Plus, there had already been two previous pilots that did not get picked up (one starred Marcia Cross and Lori Loughlin). But this one stuck and premiered to somewhat favorable reviews. Still, the witchy series couldn't find the magic and was canceled after just nine episodes. So what's next for Rebecca Romijn? Watch for the 2010 crime drama "The Steal Artist," co-starring Donald Sutherland and his son Rossif. She plays an art dealer who discovers a talented scrap-metal sculptor, who also happens to be a car thief.

Tony Shalhoub — "Monk"
After eight seasons, "Monk," the man of 312 phobias, has hung up his detective hat, leaving Tony Shalhoub looking for a new job. First stop? Broadway. Shalhoub is set to star this spring alongside his wife, Brooke Adams, in the Stanley Tucci-directed revival of "Lend Me a Tenor." Tony said he wants to give TV acting a break for a bit but would like to be involved in producing a series. He also wants to get back into film work and has even been addressing rumors of a "Monk" feature film, saying that "We've been talking about that for a long time. The cast would love to do it. But there's really nothing hard and fast in the pipeline." Personally, we're hoping for a "Galaxy Quest" sequel. Isn't it time?

Mischa Barton — "The Beautiful Life"
"The Beautiful Life" was the first show to be given the ax this fall — canceled after just two episodes. And while no one expected this Ashton Kutcher-produced scripted version of "America's Next Top Model" do die such a quick death, Mischa had a few other projects waiting in the wings. Earlier this year, she filmed "Bhopal: A Prayer for Rain" with Martin Sheen. The release date for the historical drama about an Indian industrial disaster is still pending. And in 2010 she'll star in "The Science of Cool," a sort of "Weird Science" meets "Ferris Bueller's Day Off." And in addition to her acting work, Mischa has her own line of $200 headbands and even more expensive handbags. Looks like she'll be fine without "The Beautiful Life."

Elle Macpherson — "The Beautiful Life"
Elle Macpherson, Mischa Barton's co-star in "The Beautiful Life," hasn't done much acting in her career — a few movies and TV guest spots here and there, but this was her first shot at starring in a series. Guess that didn't work out the way she hoped. So far, the Australian supermodel currently has no plans to dive back into acting in the near future. Right now, she's too busy with her lingerie line. Her almost 20-year-old company, Elle Macpherson Intimates, just launched in Berlin, and she's on the road hawking the spring-summer 2010 collection. By the end of next year, she says she'll be in 300 stores in 11 countries. Sounds like "The Beautiful Life" to us.

Jon and Kate Gosselin — "Jon & Kate Plus Eight"
We're really hoping our New Year's wish will come true that the Gosselins will go away in 2010. But their TV fate is still undecided. While Jon appears to be laying low until his lawsuit with TLC is settled — he's suing them for damaging his reputation! — Kate was featured this week as one of Barbara Walters "10 Most Fascinating People of 2009." And rumors are flying that TLC wants Kate and the kids back without Jon, but he's trying to block that from happening. In the meantime, the couple has ended their custody battle (Kate gets the kids), and the only definite plans they are discussing is spending the Christmas holidays together as a big, happy family — sounds excruciating. We're so glad there'll be no cameras around to catch that family reunion. Here's to hoping the pair stay off our TV sets for good.

Alexa Vega — "Ruby & the Rockits"
"Ruby & the Rockits" was billed as a (Partridge) family affair for the Cassidy brothers. David was making his triumphant return to TV, brother Patrick was his co-star, and brother Shaun was the producer/writer. Even youngest sibling, Ryan, was involved as a set dresser, and mom Shirley Jones made a guest appearance. But in reality, the show was ABC Family's attempt at having their own Miley Cyrus. It was all about Alexa Vega, who sang a song available on iTunes in every episode. Sadly for Alexa and the Cassidys, the show didn't skyrocket any of them to "Hannah Montana" heights and was canceled after just ten episodes. But Vega (who got her big break playing Carmen in the "Spy Kids" movies) has plenty of worked lined up post-"Ruby." There's a Charles Kaufman-penned horror film with Rebecca De Mornay, "Mothers' Day"; a big-screen "Friends"-like movie, "Cafe," about a group of chums who hang out at a coffee shop; and a Latino version of the Jane Austen classic called "Sense and Sensibilidad." But if you're jonsin' for some more David Cassidy, you'll have to catch his show touring the States starting in February.

Benjamin Bratt — "The Cleaner"
After two seasons helping people battle addictions as William Banks on "The Cleaner," Benjamin Bratt had to figure out his next move. And while there still isn't a lot in the pipeline, there's one thing we're pretty excited about. He's scheduled to make a guest appearance on "Modern Family," playing Gloria's ex-husband. We can't wait to see what Jay has to say about the appearance of Manny's dad. Also, it was a big day last week when Bratt returned to play Detective Rey Curtis for an episode of "Law & Order," reprising the Emmy-nominated role he played from '95 to '99. There are reports that he may be coming back to the show for good.

Tahmoh Penikett — "Dollhouse"
"Battlestar Gallactica" fans were stoked when Tahmoh Penikett signed on to play FBI agent-turned-doll handler Paul Ballard in the series "Dollhouse." But the show met with mixed reviews. After a short first season (only 12 episodes) and an even shorter second one (only four made it to broadcast), network execs pulled the plug, and the dolls were put in the attic. But Penikett won't be out of sight. Watch for him in SyFy Channel's upcoming mini-series "Riverworld" sometime in 2010. In the adaptation of the Philip Jose Farmer book, he'll play a journalist who dies in an explosion and awakens to an afterlife on a planet filled with rivers and all the people from Earth who have ever died.