Surprising Words of Wisdom from Miley Cyrus on American Idol 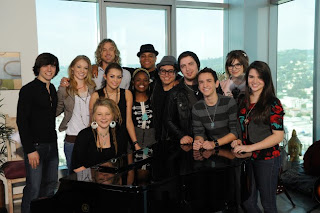 Michael Becker/FOX
Our favorite segment on The Soup lately has been "Surprising Words of Wisdom from..." And since Miley Cyrus was the guest mentor on American Idol

had for the top eleven contestants during Billboard No. 1 Hits Week.

While we always thought you needed to be out of your teens to qualify as someone else's mentor, there's no denying the success achieved by the 17-year-old Cyrus. Love her or hate her, she has sold 15 million records and is the youngest-ever multi platinum recording artist to have four number one albums in three years.

And even though Miley herself questions her longevity in the music biz — she told the girls on The View that she was going to concentrate on her movie career for now — she did have some surprising words of wisdom for the Idols. Here are the gems:

To Katie Stevens: "Remember who you are as a musician and what you love about music. Edge it up and show what you are as an artist."

To Crystal Bowersox: "There were times when she sang those high notes and she got almost Gospel. I really love that sound I think it's beautiful, but I think she could... almost showcase that a little bit more."

To Casey James: "Try to make eye contact with the first few people that are in the front row. It makes the song so personal. You have no idea how much that means to people."

To Siobhan Magnus: "Your voice has such a swagger to it and I think if you bring the swag that you have in your voice to the stage you're good to go. I like that you're so different and you're so who you are and your voice says that."
Posted by Pop Culture Passionistas at 9:06 AM