10 Things About Paul McCartney at the Hollywood Bowl 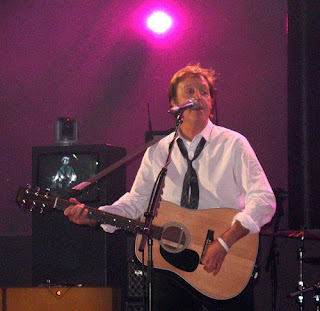 http://www.flickr.com/photos/36576534@N00/ / CC BY 2.0
We saw Sir Paul McCartney at the Hollywood Bowl last night and just wanted to share a few random thoughts with you.

1) Unless you could see a show at the Cavern Club there's probably no better place on earth to see a Beatle than the Hollywood Bowl.

3) Paul mentioned George and John during the course of the night, but no Ringo...  seemed like a sad omission.

4) Paul still wears Beatle boots. That made us smile.

5) We only cried three times... My Love which he dedicated to Linda and "all the lovers out there"; Here Today, his touching tribute to John; and Something in honor of George. OK and maybe we got a little teary during The Long and Winding Road, but who's counting.

6) Fire pots may be predictable, but there was no better moment than during Live and Let Die when they exploded and the fireworks began. If it ain't broke...

7) Paul thanked Shakey, the pyro dude, and Pablo, the sound guy, but didn't mention the band by name... an insanely talented group of musicians.

8) He still looks good in Nehru-ish jackets. Only he can pull that off.

10) We actually heard Paul McCartney sing the words, "And in the end, the love you take is equal to the love you make." Life is good.
Posted by Pop Culture Passionistas at 8:10 AM