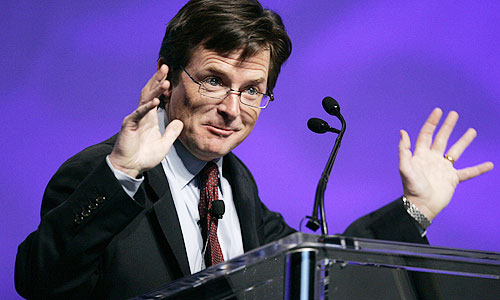 and the Back to the Future

franchise, was all over the news this week. It wasn't for being a Hollywood celebrity, not for a film or TV show, not even for something to do with his famous wife, Tracy Pollan. He made headlines for his generous humanitarian gift. The Michael J. Fox Foundation donated $4.6 million to two Parkinson's research projects.

The first awardee was a biopharmaceutical company in San Diego, Ceregene, Inc., who received $2.5 million for a clinical study in gene therapy. The other $2.1 million went to a collaborative project between Biovail Laboratories International SRL and MedGenesis Therapeutix, Inc. in Victoria, British Columbia.

Fox was diagnosed with Parkinson's disease in 1991 and has been a champion for a cure ever since.

It's hard to believe there was a time when Michael J. Fox not only couldn't donate $4.6 million, but when he ate generic boxed food to save money. Here's a video of Michael talking about his lean years on his way to becoming a TV star.