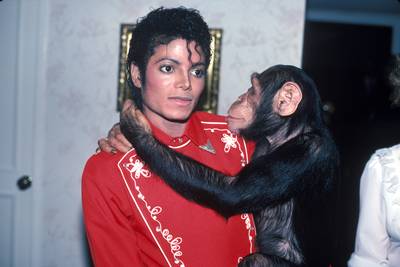 The one year anniversary of Michael Jackson's death is this Friday, June 25. Fans have been planning elaborate tributes at the Forest Lawn Memorial Park. However, the cemetery is adding  more and more restrictions on what they will allow on that day. Only time will tell how fans will be able to pay their respects.

We were happy to show tribute to Michael this week in a different way—by tuning into Animal Planet's very special documentary, Michael Jackson and Bubbles: The Untold Story. Since we were kids we have been fascinated by this period in the King of Pop's life where he was never seen without his primate companion, Bubbles.

from the 1968 Oscar-winning film). They remember Michael and his fondness for exotic animals. From snakes and rats to elephants and giraffes, Michael had a menagerie of animals over the years. But it was Bubbles who became captured America's hearts and become Michael's best friend.

, and even did interviews of his own. On one episode of The Dick Cavett Show

, Dick asked, "Are you still the same sweet chimp... I met two years ago?" to which Bubbles replied by sticking out his tongue. Jacko's pet then got up and demonstrated his ability to moonwalk. For real.

Jackson adopted Bubbles in 1982 when the chimp was just a few months old and kept him for several years until he got too large to live among humans. During that time, Bubbles lived in the Jackson home in Encino, California. He helped himself to the Haagen-Daz in the freezer, got himself dressed in feety pajamas for bed or Osh Kosh B'Gosh overalls for playtime, and helped cooked meals in the family kitchen.

By the time Michael moved to Neverland, Bubbles had grown too large and too strong to live in a confined space, and was eventually moved to the Center for Great Apes in Florida and has lived a normal monkey life ever since. No more human clothes. No more papparazzi. No more airplanes.

Latoya visited Bubbles there for the Animal Planet special. It was the first time she had seen him in 26 years. Now over 200 pounds with greying whiskers, there did seem to be a glint of recognition in his sad, deep-set eyes as he looked through the cage at his old friend's sister.

To see some a Bubbles slideshow visit Examiner.com