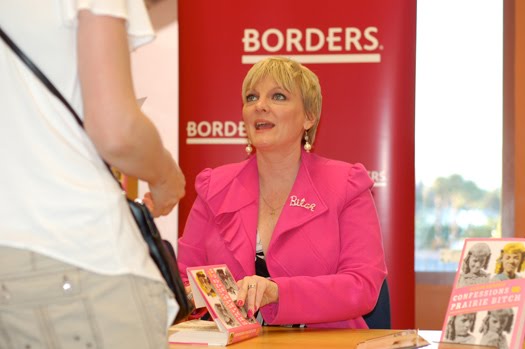 You know her as Nellie Oleson, the spoiled, angry, mean-spirited brat from “Little House on the Prairie.” But there’s a lot more to Alison Arngrim than meets the eye. And she talks all about it all in her new memoir "Confessions of a Prairie Bitch: How I Survived Nellie Oleson and Learned to Love Being Hated."

Arngrim grew up in an unusual household. Her father was a talent agent and her mother was a voice-over star—she gave life to Gumby, Casper the Friendly Ghost, and Polly Purebread, among many others. And while her parents were off leading their busy lives, a young Alison was left at home with an abusive brother. As with many people in her situation, especially children, Arngrim suffered in silence.

Luckily for her, she was able to work through some of her frustration and anger through the no holds barred character—Nellie.

Without knowing about the secrets of Alison’s past, an organization called PROTECT approached her several years ago and asked her to get involved. Not long after, she went on Larry King Live, revealed the truth, and, as a result, helped PROTECT score a major victory on legislation in California.

In a recent interview, we asked Alison about getting involved with PROTECT, what they’ve accomplished so far, and what’s next on their agenda. Read what she had to say.


PASSIONISTAS: We would like to hear more about PROTECT.

ALISON: PROTECT.org. I encourage everyone to please go to our website PROTECT.org and sign our petition. It's new. We do a lot of things at the state level and the federal level. What we are is we're a political action group. Because although all politicians and elected officials will say they love the family, "We're here for your kids." Yeah. But when a bill comes up that's going to actually directly impact children it's not like they're calling up four-year-old constituents and asking them now they feel. Kids don't vote. They don't send in any money. They've got people there.

When there's a crime bill that is going to give harsher sentences to child molesters, right? The people who show up are the defense lawyers, the people who represent the interests of convicted child molesters. This is who comes in to the offices in Sacramento and Albany and the state house and says, "Please don't pass this bill," the people who get paid to keep child rapists out of jail. It's simply their job. And they go and they lobby to not pass.

The lawyers who defend say drunk drivers. You see commercials for lawyers who specialize in drunk driving, right? They lobby to try to keep penalties for drunk driving from being too harsh and make it easier to keep people who drive drunk out of jail. And nobody thinks that's weird. It's what they do. It kind of freaks people out that there are defense lawyers whose bread and butter is child molesters. And they go and lobby politicians to keep child molesters out of jail as simply part of their day-to-day work. They do. And they're really good at it. And they have a lot of money.

And so if you want to pass a law to protect kids from child molesters, someone has to go lobby for the other side. And there hasn't been anyone, really, not on a serious level. A few victims would go in and the politicians would go, "Who are you? You're not anybody. You're not from some firm." And now there's PROTECT. And so now when a law comes up they know. The defense lawyer lobby and all the other lobbies may come through, but PROTECT is going to show up and go, "No, no, no, no. You're passing this bill. You do not want to trifle with us, dear." And there's actually now weight on the other side of the scale in favor of children and victims. So I guess I'm very proud of that.

PASSIONISTAS: It seems from your book like the people at PROTECT didn’t know your personal history when they came to you.

ALISON: Oh, heavens to Betsy, no.

PASSIONISTAS: So why did they come to you initially?

ALISON: They came to me... I knew one of the people who was starting it. I didn't know the executive director, Grier Weeks. I hadn't met him yet. It's like all these people from all over the country who didn't know each other sort of like gradually... well someone knew this person and someone else knew that one. It's like six degrees of separation. And it was all people who'd been working in child abuse fields, lawyers, doctors, police, an Attorney General. All these people who'd been doing stuff and seeing their best efforts thwarted by weird stupid laws and loopholes.

They'd have a child who had told. They'd get the kid to court. They'd arrest the perpetrator. They'd convict the perpetrator and the guy would walk out the courthouse door five minutes later. And they'd be left hanging going, "Wait. What did I just do for six months?"

So all of these people were getting fed up and then finally the phone calls were, "I think we can do this. I think we can do this." And then Grier Weeks, who had experienced in political lobbying, had done this for a living. It was like, we found a guy and it all started happening, I get this call, "Well we think we're doing this. Do you want in?"

And then I get this phone call, "Hi. My name's Grier Weeks. It says here in my notes you were on some TV show?" He never watched Little House on the Prairie, which is really funny. So he's like, "I have no idea why I'm even calling you, but who are you and why are we doing this?"

And we started talking and he's like, "Great. Great. Well, OK. You're an actress and what would you like to do?" And poor Grier, he had a list of people he had to call like a phone tree and he knew that some of the people he was calling had been abused as children and some of them hadn't. He had no idea who. And he was in the horrendously uncomfortable position of having to invite these people to be on the board, and find out what level of commitment they wanted to make, and how involved they wanted to be. And somewhere in the conversation deduce if they were one of the abuse survivors or not, without being rude and asking.

So it was kind of hilarious. And so he was being really polite and he was like walking around it and, "Well, yes… and so... ummm, er, ummm." And I said, "Oh you're trying to find out if I was abused, aren't you? Oh here, let me clear that up for you." And he was so relieved he was like, "Thank you. I wasn't going to ask." So we're very good friends now and we now think that was hilarious that that was our initial conversation.

But that's the thing... our executive director, Grier Weeks wasn't abused as a child. We have doctors and lawyers and police. The actor David Keith, famous for An Officer and a Gentleman and he's got a new series in fact coming out called Lonestar. He's our director of development. He goes all over the country for us, and to Washington, D.C. And David Keith wasn't abused as a child. He's not an abuse survivor. But he's married. He has a young daughter. And after he had his kid he's like, "God, people are sick." And he started doing a lot of stuff for child health and different charities. And he's living in Tennessee and there was a case of a kid who was severely abused who had almost been beaten to death. And they couldn't find enough things to charge the parents with. And he realized that there were huge loopholes in the law. They didn't have a catastrophic abuse law and he… started phoning everybody going, "Can you help me? Can you help me?" And next thing I know, David Keith calls up PROTECT and he goes, "Who are you people? Can you help me?" And we went, "Yeah." So now David Keith is our friend.

PASSIONISTAS: What's at the top of the PROTECT agenda right now?

OK, an example is I believe her name was Somer Thompson, a little girl who was raped and murdered in Florida. She was walking home from school with her older sisters and friend, the really little girl. Well when they caught the guy, he was a sex offender and blah blah blah blah blah... he killed her. Well, here's the thing. He had been arrested a couple months before for child porn. They had his hard drive. They hadn't been through his entire hard drive yet because they didn't have enough people on staff. And his hard drive sat there. They have now been through his hard drive. On his computer is a video that he made of himself raping a three-year-old girl. Had they had the time and the manpower to look at that hard drive... Hello? He would have been in prison when that girl was walking home from school and she'd be alive.

So that is one of the shining, screaming examples of what we mean when we say, "We kinda need a little more money for the manpower for these people to look at this crap." We've got people who are doing it, they're on the job, who are actually paying attention to how heinous the problem is and are actually investigating child abuse. But they're swamped. They're freaking swamped.

And that's part of what this petition is. We've got a bunch of legislation passed, by the way, successfully, that has helped these teams enormously. We've got thank you notes from them already. But there is a petition saying to President Obama, to Congress, “We support the immediate arrest of known predators—people who are known to be committing these crimes right now. And we request that you allocate appropriate funding to these agencies. Could you sling a few dollars towards the cops who are waiting to go arrest these people?” So that's our biggie right now.