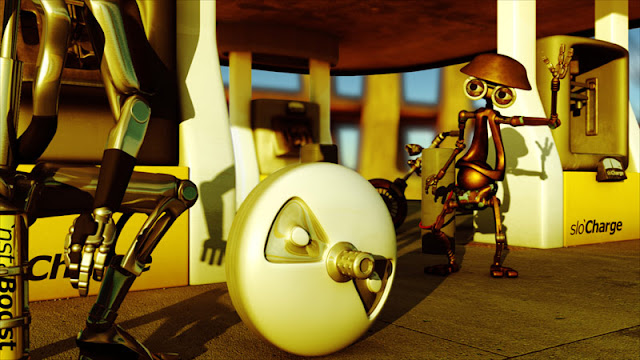 'nstaCharge is a charming animated short about Rusty, a rickety old droid, coveting the new batteries of Lola, a hot young fembot. The film is only two minutes long but it is packed with clever character design (Lola's body becomes her own motorcycle) and beautiful imagery.

It has recently been accepted into the Burbank International Film Festival, among many others. We expect you'll see and hear a lot more about Emmy-nominated filmmaker Igor Choromanski. He has big plans for his little robot including a feature film. And with credits like animator on Cloudy with a Chance of Meatballs

and Cats and Dogs 2 under his belt, his vision could become a reality. As he says himself, "Fingers crossed."

We spoke with Igor about 'nstaCharge, his influences, and what's up next.

IGOR: My name is Igor Choromanski. I was born in Warsaw, Poland and now live in Santa Fe, New Mexico.

PASSIONISTAS: When did you start making films?

PASSIONISTAS: Why did you start making films?

IGOR: I’ve always enjoyed telling stories. Prior to film making, I expressed myself through writing.

PASSIONISTAS: Do you do only animation or have you made other kinds of films?

IGOR: So far I’ve only done animated films, though I don’t rule out live action sometime in the future.

PASSIONISTAS: Where did you learn your craft—at school or on the job?

IGOR: I’m mostly self-taught, though I did take a course in advanced character animation several years into my career.

IGOR: Not sure if you could identify their influences in my films, but I’m very much partial to the old masters such as Sergio Leone and Francis Ford Coppola. I’m also a big fan of [Quentin] Tarantino.

PASSIONISTAS: Tell us what 'nstaCharge is about?

IGOR: It’s a story of an outdated, quirky little robot who falls for his sexy friend's latest rechargeable batteries.

PASSIONISTAS: What was the inspiration for 'nstaCharge?

IGOR: Most of my creations come into being in a creative kitchen of sorts. I take a piece of paper and a pencil and start putting down whatever ingredients I have a craving for at the time. With 'nstaCharge, I was fascinated with the idea of a robot whose body would double as a frame of a motorcycle.

PASSIONISTAS: Can you tell us about the process of designing the characters?

IGOR: It’s a balancing act between flights of fancy and the need to satisfy the practical requirements of both the story and production. Rusty’s sphere belly, for instance, conveys an older man with a slight, sagging gut while at the same time enabling the animator to place his electrical cord wherever it best suits the character’s silhouette in a given scene.

IGOR: About three years, in my spare time.

PASSIONISTAS: How many film festivals has 'nstaCharge been selected for to date?

IGOR: So far, the film’s been selected by 21 festivals, winning seven awards.

PASSIONISTAS: Are you planning on attending The Burbank International Film Festival? If so, what do you hope to get out of it?

IGOR: I would like to and certainly will make the effort, but might be working on a project at that time.

PASSIONISTAS: Is 'nstaCharge a self-funded short?

PASSIONISTAS: Is IKARIA your studio?

IGOR: Yes. Ikaria is run by myself and my partner, Min Kang.

PASSIONISTAS: What clients do you work for?

PASSIONISTAS: What films have you worked on for your clients and what was your involvement?

IGOR: I’ve worked as an animator on a couple of feature films—Cloudy with a Chance of Meatballs, Cats and Dogs 2. I’ve also been nominated for an Emmy for my work on an animated title sequence for Ridley’s Scott’s The Company.

PASSIONISTAS: What's up next?

IGOR: I just finished writing a script extending 'nstaCharge into a feature length film and we’ve already had some promising interest in it. Cross your fingers :).

To see a slideshow of 'nstaCharge images visit Examiner.com.

For other interviews with directors from the Burbank International Film Festival check out:
Pop Culture Passionistas: Want to Hire Matt Damon, But Can't Afford Him? Here's Your Guy
Is Alex Lamburini the Next Spielberg?