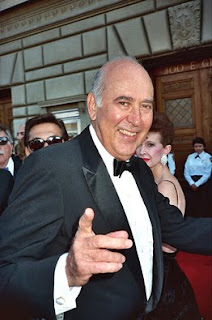 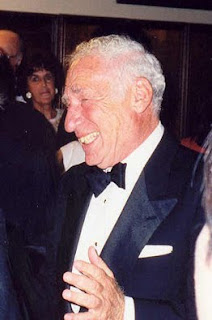 When people recount the great comedy duos of all time, Mel Brooks and Carl Reiner certainly top the list. Although they’ve each enjoyed hugely successful careers on their own, their 2000 Year Old Man

comedy albums are among the funniest recordings of all time.

and pitched the idea for the show. It was rejected but became their go to bit when trying to fill lulls in conversation, entertain each other during a long day, or at dinner parties around town. They never intended to commit it to vinyl until a famous friend intervened.

On Recording the 2000 Year Old Man

CARL: Mel, for the ten years we worked together doing the 2000 Year Old Man, it took Steve Allen to say you've gotta put that on record. We thought that the 2000 Year Old Man was only for our Jewish friends and our non-Anti-Semitic gentile friends.... Remember, it was five years after the war and the Jewish accent and the...

MEL: It was questionable taste...

CARL: The middle-European Jewish accent was really your Uncle, I think.

MEL: Well, my Uncle Joe and my grandma.

CARL: Anyway, it was Steve Allen...

MEL: The only word in English my grandmother knew was subway. There's no word in Russian.

CARL: We were persona grata at every party. They'd say, "Invite Mel and Carl and they'll get up and do this thing."  And we were like Mozart. He'd play and then they'd lead him in the kitchen... So at this one party was one of those A parties, A-List parties and these three people came up to us after we got up and did our thing.

The third guy who came up was Steve Allen, and he said, "You know fellas you gotta put that on..." We said, "No, it's for friends." He said, "Look... I have Royal Pacific Jazz where I do my music... take that studio, do whatever you want with it... you can burn the tape, you can expunge it, you can cut it." But he didn't want to be partner. He was one of those guys who wanted to get comedy out to the world. He loved saying, "Here's somebody funny." And it was Steve Allen and we did it.

On Whether or Not Sid Cesar Was a Tough Boss
CARL: Not at all.

MEL: He was mostly heaven and a little hell. I can tell you a story in Chicago that was a little bit of hell. I went to Chicago with Sid to help him fashion an act that he was opening at the Palmer House. And he wasn't happy with the response to some of the jokes... And it was about 12 o'clock or 1:00 in the morning and I was really tired and Sid was smoking cigars and I couldn't breath. And I said, "Sid, I need some air. I really need some air." And he said, "You'll get some air" and went on and on and on. And I said, "Sid, I need some air." And we had this argument. Sid threw open a window, this is all true, grabbed me by my ankles, held me out the eighth floor window of the Palmer House in Chicago. I could see Michigan Avenue. I could see the traffic underneath me.

Sid had a violent temper but he held it in check.

He was very, very strong. He went to Al and Dick's restaurant in New York and he couldn't find a parking spot. And he doubled parked and he went out, picked up a Volkswagen and put it on the sidewalk.

CARL: This is a true story.

MEL: He didn't pick it up at once. He picked the back up first and then the front...

CARL: But he did have a sense of humor with his anger. He parked his car one day and the guy went... in a spot he couldn't fit in... and he kept pushing his car. He banged into his car and he came out and saw the guy pushing his car. Remember the small windows...

MEL: It's my story but I'll let you tell it.

CARL: No, no. I want you to tell that story. Go ahead.

MEL: Anyway, it happened in Chicago at the same time because in Chicago they wore a yellow cap and a black leather bow tie, the cab drivers. And it was a cab that Sid cut off. He rented a car and he was in his tux and he cut the cab off and the cab cut him off and pulled it over and began yelling at Sid and Sid got out of the car and the cab driver was screaming up at him.

And when he saw Sid come over he rolled up his window because Sid's a big guy. But he left a little clipper window, remember a hundred years ago they had these little wind screen windows....

MEL: So he left that open and Sid very calmly looked down at the cab driver and said, "I have to ask you a very personal question."

And the guy looked at him quizzically and said, "What are you crazy? Who can remember being born?"

And he said, "I know you can't remember so we're gonna reenact it." And he grabbed the bow tie and he began pulling him through [the window]. And I literally bit his knuckles to stop him so we wouldn't all end up in jail. And we got back in our car.

CARL: It's funny. He was strong, he was angry, but he was always funny. This one I didn't see but he reported it... He was riding with his wife, horseback riding in Central Park and his wife's horse shied and almost threw her off. He got off his horse and punched the horse.

MEL: I stole it for Blazing Saddles