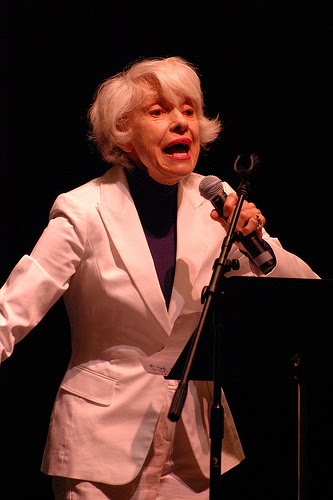 
Carol Channing is one of the most decorated actresses in history. She has three Tony Awards—one for Best Actress in a Musical for Hello, Dolly! in 1964, a 1968 Special Award, and the 1995 Lifetime Achievement Honor. She has a Golden Globe award for Best Supporting Actress for Thoroughly Modern Millie

She’s received the Best Nightclub Act of the Year Award, the Oscar Hammerstein honor for lifetime achievement, and the Julie Harris Lifetime Achievement Award from the Actors' Fund of America.

Oh ya, she has ten gold records and a star on the Walk of Fame, too.

So what else could Carol Channing possibly need?

Well some of her famous friends have started a campaign because they believe she deserves a Kennedy Center honor. After all she starred in over 5,000 performances of Hello, Dolly!

, and competed on some of the best TV game shows in history—a round of Hollywood Squares


And, of course, she lent her voice to one of our all-time favorites Free to Be… You & Me

By now, you must be wondering what you can do to help make sure that Carol gets the credit she deserves. Who better than fellow funny lady Lily Tomlin to explain (via a post on the Carol Channing should be a Kennedy Center Honoree Facebook page):

Thanks in advance for your help and participation!

Channing continues to give as much as she gets, too. Her Channing Arts organization campaigns to restore arts programs in public schools. See who she enlisted for this celeb-fueled PSA supporting the cause: