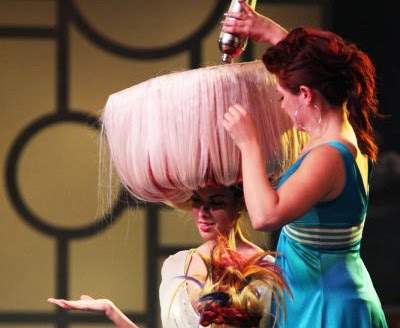 , there's a new coiffing show in town and this one is EXTREME. Oxygen's Hair Battle Spectacular premieres tonight at 10:00 PM, with ten hairdressers going head-to-head to see who's the best in fantasy hair design. Hosted by Brooke Burns (of the new Melrose Place, Dog Eat Dog, and Baywatch

fame) the competitors will live together in a house while their visions walk a weekly hair battle runway to win $100,000.

for good measure. The designs range from hairstyles that look like wedding cakes to toys with moving pieces. It promises not to disappoint.

We spoke with host Brooke Burns recently about how she got involved, her favorite theme, and her worst haircut ever.


Q: What can you tell us about the format of the show? How are the challenges and eliminations going to work?

BROOKE: I like to say it's a little bit like Shear Genius on steroids. We're doing fantasy hair, not just haircuts or hairstyles. And these hair designers are truly artists. But we start with ten fantasy hair designers and then over the course of eight episodes we narrow it down to one winner who wins $100,000. And in every show we have an elimination.

The way that we eliminate them is we have almost like a UFC battle type of ring where they come and perform one-on-one with each other. They're paired up with a partner and then at the end of the show we have a group of people who are safe, designers who are safe, and designers who are up for elimination. And then of that group we have one that actually gets sent home until the very end.

Q: How did you get involved in the show?

BROOKE: Well I love hosting and I'd never done a reality show quite like this one where you start with the contestants at the beginning and you're with them through the entire evolution, where they're living together and competing and that whole thing. But I sat down with Oxygen and I really liked their whole spin on it, and the fact that they appeal to the young female demographic. I grew up in a family of all girls, I have a little girl, and so I guess it felt very close to my home... close to my heart to work with them as a network. And then I just thought the show was really fun. And I loved the idea of giving an artist the $100,000.

Q: In a previous interview, you said that your managers used to say, "Seriously Brooke, a reality show, really?" Do they still say that? And do you still do it because you enjoy it?

BROOKE: Yeah, there used to be a lot of snobbery—if you were a model, you were never going to be an actress. And if you did commercials, you would never be on a TV show. And if you did a TV show, you would never be in a film. And I think that those lines have really been blurred over the last few years as the entertainment industry has evolved. And everybody's doing a little bit of everything. And I think that's okay. I always like to say, "I just love working. And I like working in different formats." And I don't think that that's a bad thing. And reality is certainly taking over at this point in time.

Q: As a host, do you ever become attached to certain contestants or want to root for them along way?

BROOKE: Oh gosh yeah, definitely. I think all the time. Whether it's on a show like Dog Eat Dog where you get contestants, new contestants, every show; there are still personalities that you bond with or a fighting spirit that you connect with. But as a host you have to stay impartial and really root for all [of] them.

With Hair Battle it was a little different because we started with ten and we spent the entire journey with the same people. So you see the ups and downs of each person and personality and what have you. But I think by the end, it's like a family. You love people for certain aspects and other people have funny personality traits, and other people are just crazy and eccentric, and you love them for that. So everybody has their unique pull I guess.

Q: Can you talk about any of the challenges that the contestants went through that were surprising, even for you?

BROOKE: Sure. Yeah, absolutely. I think that in every episode there is a jaw-dropping moment, because even though I like to think that my imagination is broad and limitless… it's amazing to see a fantasy hairstylist's expression come to life on a model with the things that they've been given... to create these incredible masterpieces. And then with every show we had different themes. So we've done everything from toys to wedding themes to edible elements to vampires. And when you give a group of artists a subject matter, and then you watch them just fly, it's so beautiful and inspiring, and definitely shocking at times where you're thinking, "Oh my god, If I were in this competition that would never have crossed my mind. Where did you come up with this idea?" And I think that that's part of the appeal of the show.

Q: Was there ever any time that the stylists were working on the hair and they had it where they wanted to and then there was some disaster where the hair collapsed?

BROOKE: Of course there was.

Q: How did that impact the contest? Did they get eliminated for that?

BROOKE: They didn't get eliminated but it's definitely taken into consideration as far as points. Our elimination system is a little different, where they compete head-to-head; out of the whole group, they compete every night one-on-one with another partner. And then we have a group who are safe and a group who are up for elimination. So they're judging on creativity, technique, and then overall presentation. So clearly if your overall presentation and your technique aren't up to par, you should be nervous... that you're going to be in at least the elimination pile. But yes, when you're dealing with fantasy hair, no matter how much chicken wire, no matter how much hairspray, no matter how many things you've sewn... together. You're dealing with... something that's two feet wide by three feet high. Definitely disasters are eminent.

Q: What was your favorite theme?

BROOKE: Oh goodness. I don't know if I had a favorite. I liked different ones for different reasons. I think that there are specific styles that really stood out in every theme. Once they started really incorporating the wardrobe and the outfits, as we progressed in the season into the hair, I think that those were probably some of my favorites. I don't want to give away too much about specifics. But they're just shocking what these designers came up with.

Q: Would you ever consider being one of the models? And if so, which design would you like to try on?

BROOKE: I have a lot of respect for these guys because they sit for hours and hours and hours. And we actually had to use neck braces for certain headpieces because they were so extravagant and so heavy. Now, having broken my neck in 2005, my neck is now built of titanium. So I think that I would be the perfect model for a fantasy hair design. Although I don't know if my patience would match my neck strength, if you will. So I'd give it a try.

Q: Are there going to be guest judges that will come in and sort of shake up the dynamics?

BROOKE: Yes, absolutely. Every show... we have a guest judge come in that is specific to the theme of the night. So they have [a] different point of view that they're judging from.

Q: Is there a celebrity you'd like to see on the show?

BROOKE: I think that Lady Gaga would be the poster child of this show, because she's so fearless in her designs and hair creations herself. Wouldn’t that be fantastic? And we could have [her] songs in the battle arena. I think it would be great. There were a couple of [episodes] where we had male models come on. And I think that their expressions are always so hilarious and fantastic because they're not typically used to this kind of thing. So I might have to pick some stand-up comedians, or the antithesis of who you think would be like the right model for this show.

Q: Why does it seem like all stylists have bad hair? Why do you think they are so fearless about trying any hairstyle that can be imagined?

BROOKE: I think it's part of the artist's personality to want to reinvent yourself and try new things, and live life on the edge. I know certainly, I've been through an evolution of haircuts and hair colors. And I think it's individual artistic expression.

Q: When you're personally dealing with stylists do you have to hold them back? Do you have to say, "I don't think I want to go that far because I can't be as fearless as you."

BROOKE: Well, I think that it's different, clearly, in real life than it was on Hair Battle. I think the great thing about the show is that there is no holding back. I mean, we're talking about fantasy, avant-garde hair which means the bigger, the crazier, the better. So you know, we really encouraged them to stretch their imaginations and their fantasies to the limit.

Q: What’s been the craziest hairdo you’ve ever have to sport as model or as an actress?

BROOKE: Wow. Me personally, well surprisingly I did spend a bit a time in Germany and Milan doing runway shows and some catalog work. And embarrassingly I did a Halloween catalog once in a tiny town in Germany where I had definitely a fantasy hairpiece—so I didn't know what it was at the time—that had all different colors of hair. It was like a rocker Halloween costume. And they put chains throughout my hair in beehive fashion, I guess would be the best way to describe it. It was like, Morticia Addams, but the beehive era.

Q: So you know exactly what the models are going through on the show and all about the fantasy hairpieces?

BROOKE: I think I can definitely sympathize.

Q: Do you recall like your worst haircut ever?

BROOKE: I have gone through many hair variations and colors as well. I think [the] worst cut would have to be, I had bangs when I was in first grade. I'd always had really long hair because I was a ballerina growing up. But I cut the feather bangs that part down the middle and like feather off to the side. But they were really thick and kind of bouffant-y. So, I have a really small face, and it was not a good look for me.