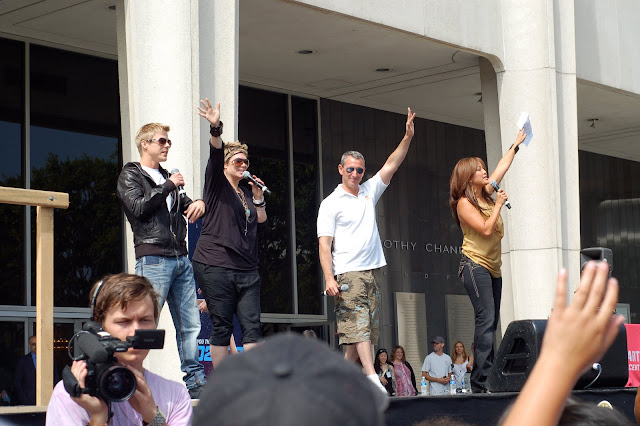 This past Saturday, crowds gathered nationwide, from Washington D.C. to Chicago, to Los Angeles, to help celebrities from So You Think You Can Dance and Dancing with the Stars celebrate the first National Dance Day. The event was the brainchild of SYTYCD's judge and executive producer Nigel Lithgoe who thought the day would help promote healthy living through dance.

We went to the festivities at the Music Center plaza in downtown Los Angeles. It was pretty inspiring and lots of fun. The main event had all the attendees on their feet to get down to a number choreographed by SYTYCD's Tabitha and Napoleon Dumo (aka Nappytabs). Leading up to the event Lithgoe had been encouraging everyone to learn the steps for the flashmob dance from the online video demo (and people had been sbmitting videotapes of themselves doing the routine).

On hand Saturday were choreographers and SYTYCD judges Adam Shankman and Mia Michaels who were joined by DWTS's Carrie Ann Inaba and Derek Hough. Melinda Sullivan (the SYTYCD Season 7 tapper who made the Top 10 but was eliminated early on) led the crowd in a warm-up.

Then Michaels, Shankman, Inaba, and Hough introduced Nappytabs who led the crowd in the Hip Hop routine. At one point Adam and Carrie Ann came back onstage with Nappytabs to dance with them and the crowd. Tabitha said she was adding the routine to her resume because she was so excited to be dancing with Adam and Carrie Ann.

After the group dance, a party broke out with music by KCRW DJ Garth Trinidad. Some of LA's best food trucks including Papa's Tapas and The Flying Pig.

Check out this slideshow of the event: