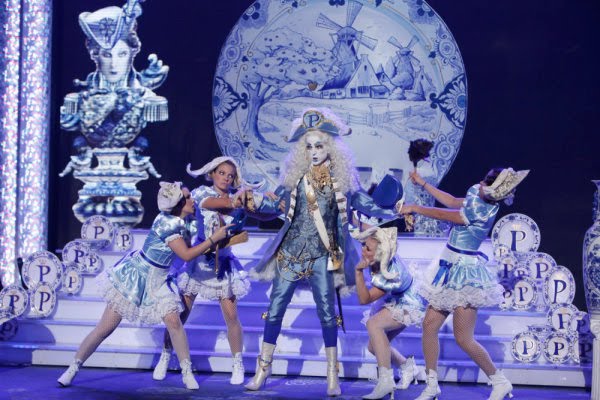 While we've been covering all of the America's Got Talent finalists, and they all have a special place in our hearts, we do have to confess that we have a favorite. We can't help but love the spectacle and grace that is Prince Poppycock.

By now even if you don't watch the show, you've most likely seen Poppycock on The Soup or on the internet. In a recent interview he described himself as "Part randy dandy, part drunken courtesan. I dress as a geisha, clown, 18th century dandy. And I sing."

And powdered wigs, white face make-up, dandy frocks aside, he voice is fabulous. A classically trained opera singer, 32-year-old, John Quale started his career as Poppycock in a nightclub called Wig Out, where he was allowed to perform whatever he wanted as long as he wore a wig. And so, Poppycock was born.

Quale credits the dandy prince with changing his attitudes about life. John said, "I've struggled with depression in my life. Because of the inherent meaningless of life. Because life is absurd but... you can mourn that fact or you can flip it on its head and you can say, 'Nothing means anything. Lets have a freakin' party.' And that's what Poppycock gives me."

The singer would like to perform as Poppycock for a long time to come. He hopes that his stint on America's Got Talent, win or lose, will afford him that dream. He stated, "I really just hopes this leads to a career... We could start planning a Vegas review tomorrow. And then hopefully the Vegas review would lead to a second stage show, which would be more of a narrative-based show along the lines of Hedwig or Pee Wee Herman. And then from there I'd like to take the Poppycock legend into a movie."

We asked if he would write the narrative show and he replied, "I've written a few songs from it... It would obviously include a few classical pieces as well. So it would be this mash-up of Broadway, pop rock, opera—all in this fantastical fantasy."

We talked to Poppycock about whether he gets recognized on the streets now after being on national TV. He confessed, "I don't court fame. It's something to be managed. I realized that if I was going to perform at the level that I wanted to, people are going to know who you are. But I have never wanted to be famous. People do recognize me from time to time, but they feel like they figured it out, like I'm trying to pull a trick on everyone." It's no wonder he's chosen a character in complete disguise—the perfect way to stay anonymous.

Quale may be hiding from fame, but he has a clear cut message that he hopes Poppycock will help him deliver. "Life is a miracle and the simple fact the we get to experience it is something that should never get old to anyone. And that belief is a magical power that we all possess and we can all put it to use every single day. The great performers that I've seen in my life always leave me with that feeling. It's so easy to forget because things can become so mundane. It's easy to take things for granted and it's important for us to not only remind others but to seek out inspiration to remind ourselves."

Tune in the the America's Got Talent tonight and tomorrow night at 9:00 PM on NBC.