Jeremy VanSchoonhoven Has a Dangerous Talent 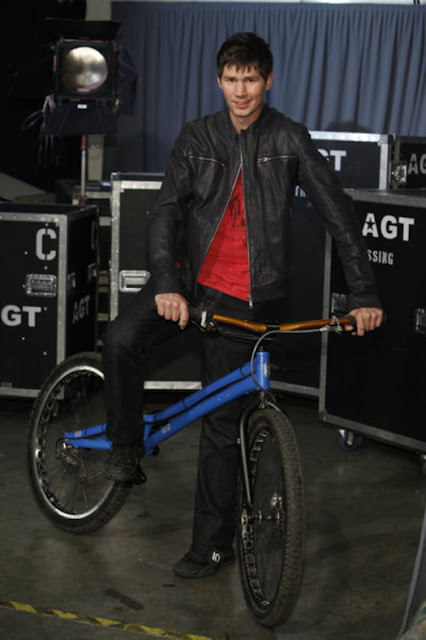 Not since Johnny Knoxville and his Jackass

pals started stapling objects to their body parts and purposefully crashing into things, have the words “Don’t try this at home” applied so aptly to a TV performer.

But America’s Got Talent stunt rider Jeremy VanSchoonhoven will be the first to tell wanna-be’s that they shouldn’t just hop on their bikes and try a trick or two. In a recent interview he cautioned, “The key is being safe—wearing your helmet, wearing your safety gear, and not trying things you’re not ready for. So many of my friends have hurt themselves because they’re like, ‘Oh, I want to go off that huge jump.’ And it’s like, ‘You can’t even do the medium size one. Why are you gonna do that? I mean you might make it. But you might not.’ So I think it’s really important to start small, slowly build up, and be as safe as you possibly can.”

Point in fact, the 27-year-old Oregonian, has never broken a bone doing his stunts. And as for his worst accident, he explained, “My worst crash, you saw. And that was on America’s Got Talent. Before that, I had a bad crash six years ago and I hurt my ankle really bad. But that’s it really…. No broken bones. Like I said, I try to be as safe as possible.”

Now, stunt riding might not be an obvious performance choice for AGT, so we were wondering what prompted Jeremy to even try out. He told us, “I decided to audition for the show because I used to do little bike shows at fairs and festivals. And I had an agent that booked me for those. And he booked another act, who was a ventriloquist. And he went around to those, too. And that’s Terry Fator

, who’s the winner of America’s Got Talent—got one of the biggest shows in Vegas.”

After Fator became a megastar, Jeremy’s agent was too busy to book his shows anymore. And VanSchoonhoven was forced to work two jobs to make ends meet—as a machinist and as a horseshoer. On a trip to Vegas to help a friend at a tradeshow, Jeremy finally got the push he needed.

“I see Terry Fader stuff everywhere—in all the magazines, on all the billboards, on all the taxicabs. And I’m like, ‘Man, we did the same shows, same crowds, got the same reactions, and he’s here and I’m not. And so I actually looked in one of the magazines and it said, ‘For booking call this number.’ And I called that number and I talked to the people there and I got a hold of Terry. And he’s such a nice guy. And he invited me to his show. I went to his show and I watched it and it was unbelievable—best Vegas show I’ve ever seen. And I talked to him afterwards and he said, ‘Jeremy, you’ve just gotta go for it.’ So I went back and I looked up when auditions were and the rest is history.”

It sure is. Jeremy has made the final ten. And whether he wins or loses, he has a very clear goal. “I want the producers to get a hold of me. I want Hollywood to get a hold of me and make me into an entertainer. So that’s why I’m here… I’m really hoping that this leads me to a Hollywood show. I’ve already planned the whole thing out. I know how the show should look. I know what I wanna do. Because I think it’s really important to set goals, that way you know what you’re going towards. You have to have steps to take to get there. And I think it’s really important for everybody out there to realize that if you set goals you can reach them. And you need help though, but you really need to know what your goals are and you gotta go for it.”

Regardless of the outcome, Jeremy is clear about one thing—he is grateful for his fans. He gushed, “I’m just so thankful that America has helped me so much and brought me to this point because I’m right on the edge of my biggest life dream coming true and it’s because of America voting me through every round. And it’s unbelievable to me and I just thank everybody so much.”

Tune in tonight to see all of the top ten perform on NBC at 9:00 PM and tomorrow night when the final four are revealed.
Posted by Pop Culture Passionistas at 2:00 PM