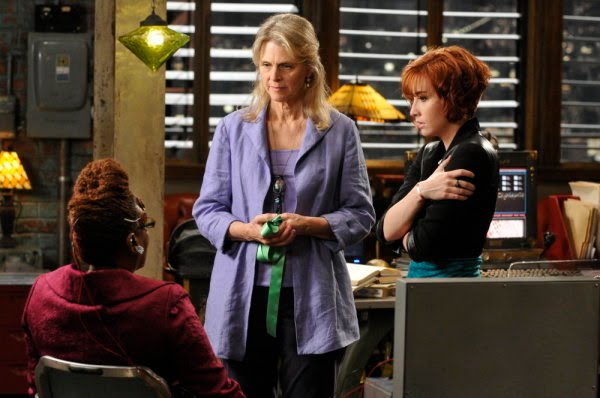 The second season of Warehouse 13

is drawing to a close—the finale airs next Tuesday, September 21. But before that, tonight's episode features Lindsay Wagner, of Bionic Woman

fame, in her second appearance as Dr. Vanessa Calder, the physician and old flame of Warehouse boss, Artie.

In a recent conference call interview, Wagner revealed that when she got the call to do the part, she had never seen the show. So she went online and brushed up on her Warehouse 13.

She said she, "Found it to be just a really fun concept. Very creative. And, the visuals—the way it’s shot and the chemistry of the actors just really impressed me. It’s really fun. And in its own way, very current and very today, but it felt a lot to me like The Bionic Woman which is what attracted me to want to take the part and do a little cameo, which of course now is kind of turning into somewhat of a recurring Warehouse doctor."

When she is not acting, Wagner spends her times giving seminars called Quiet the Mind and Open the Heart. She explained, "I teach techniques that I have found that were really helpful in my life… which is that our experience of any life circumstance, our experience of it is a function of our perspective of that circumstance, not the thing that’s happening itself.

It was this belief that drew her to Dr. Calder because she uses some of these very techniques. Wagner said, "Dr. Calder is being based around what’s happening today and what is generally referred to as the Energy Medicine field. It’s working with the energy system directly to heal the physical instead of focusing so much on trying to fix the physical only… We can shift and change a demonstration by way of physical intervention, but if there is not some kind of a shift on the energetic field and the physiological views of the person, either about themselves or the outside world, then either that condition will come back or it won’t be a complete healing and something else will manifest as disease, or some problem with the body."

Wagner explained that one thing the two women have in common is the belief in the Chinese concept of Chi. "One of the techniques that I teach in my workshops is based on acupuncture, and it is in fact what I do in the show, the technique that I’ve used thus far in the show."

Lindsay was impressed at how willing the writers were to incorporate her personal methods in the character of Dr. Calder. She recalled, "What tickled me the most right off the bat was when I got… my rewrites for the next day. They’d rewritten a little bit of my script. And, the writer had gone on to my website from my workshops… and looked at the kind of work that I was doing, and he pulled from one of the techniques that I teach… And put that into Dr. Calder’s treatment on her first appearance, and then allowed me to elaborate on it to kind of get it more specific."

She continued, "It’s very subtle what we’re doing. It’s just part of what I do when I’m talking to the character and treating them. But, it was really impressive to me that they took the time and effort to want to put something new into it, and something that was really directly related to the work that I’m doing."

Of course, when you're on the phone with Lindsay Wagner, you have to ask about The Bionic Woman. Linsday said after all the years she never tires of Jamie Sommers questions. "I know some actors feel that way, but for me, we put so much of our heart and soul into… trying to make it something meaningful, that to me it just says it worked. It doesn’t say to me that I’m stuck in that image, because I went on to do 40 television movies, and series, and features, and mini-series; all kinds of things, playing all kinds of different characters.

She concluded, "I consider that whole thing to have been a gift to my life. And, I love it when people share with me that it was for them as well. That makes me very happy."

Tune into to Warehouse 13 on Syfy tonight at 9:00 PM to see Lindsay Wagner and don't miss next week's season finale on September 21.