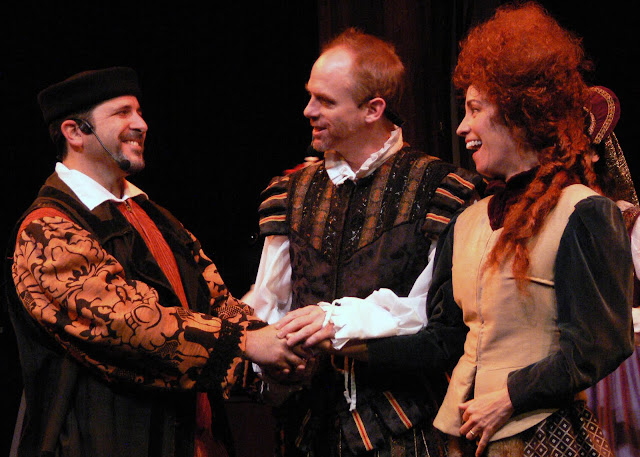 We knew we would enjoy A Wither's Tale at the Falcon Theatre in Toluca Lake, the second the pre-show announcements began. The first apologized for the incorrect use of the apostrophe in Wither's. The second encouraged audience members to please leave their cell phones on if they wanted to "make the performance all about you and stop the show cold." It just got better from there.

A Wither's Tale, a Troubador Theater Company production, combined William Shakespeare's A Winter's Tale with the music of Bill Withers. Of course, we all know the first Bill, but the second is one of those musicians that few people know by name. Still, mention some of his songs—"Lean on Me," "Ain't No Sunshine," and "Just the Two of Us"—and they are often favorites.

The bulk of the book was Shakespeare's original language to which the company applied some broad creative license and sprinkled with a wide array of pop culture references. Naturally we ate it up: the ladies in waiting being introduced in the iconic Charlie's Angels

pose; a lord asking King Leontes to not "go all Mel Gibson on us" after bursting into a rampage; an inmate calling out to Lindsay when Queen Hermione is taken to her jail cell.

Matt Walker (as Leontes), Lisa Valenzuela (as Oracle and Mamillus), and Beth Kennedy (as Paulina and the Shepherd) delivered stand-out performances among a very talented ensemble. It's hard to go wrong with Bill Withers' music, but this powerful cast and masterful band did it justice. And the choreography in particular was impressive for a production of this scale.


For other theater stories check out:
Bryan Batt on His Broadway Career
Florence Henderson Tries to Pull a Betty White
Andrea McArdle Returns to Annie