A Big Week for The Biggest Loser 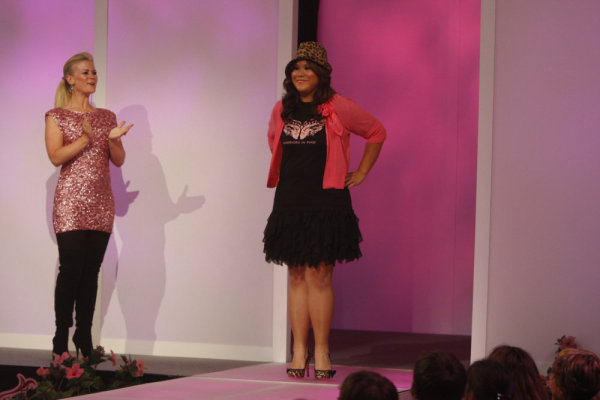 There's a lot of Biggest Loser news this week. Bob, Jillian and Alison pitched in to help the striking crew and Makeover Week included an added charitable twist. Plus, tonight fans are going to get a chance to check in on past contestants during the Where Are They Now special.

Alison, Jillian and Bob Give Themselves for the Crew

Last week the crew of The Biggest Loser walked off the set and temporarily shut down production. They were demanding a union contract for their work on the reality show, the last big one to still be non-union. In a display of solidarity Alison Sweeney (who has a no strike clause in her contract) along with Bob and Jillian decided to do something to help out the crew rather than stand by helplessly.

They auctioned themselves off on Ebay. Alison put three private lunch dates on the bidding block, which went for $1,125 each. Jillian and Bob each offered up a one-on-one training session. Bob's brought in $3,050 while Jillian's auction closed at $9,300. The proceeds went to the striking crew. Sadly even that large sum split up between 100 workers basically covered the coffee they each drank on the picket line. The good news is, the strike was settled on Monday and now the crew will be eligible for union health insurance benefits.

The most anticipated episode of The Biggest Loser season was on last night—Makeover Week. This year Ken Paves, hairstylist to the stars–including Lady Ga Ga, Fergie, and the Simpson sisters—joined the contestants to primp them for a People magazine photo shoot. And then after the shoot they walked the runway modeling Ford Warriors in Pink clothing and accessories available at FordCares.com in support of Susan G. Komen for the Cure. In a behind the scenes interview, Jillian talked abut working with Ford Warriors in pink, saying, "We're trying to make sure that a lot of the stuff that goes on this season transcends into a greater, bigger picture. And combating breast cancer is definitely something we're fighting for."

And in the spirit of paying it forward, two contestants made a big sacrifice for a fellow player. Ford donated a 2011 Ford car to the winner of this week's challenge, which saw the contestants climbing 300 feet of stairs up and down, 20 times. Ada and Brendan dominated the challenge, but in the end they waited at the top for Patrick to catch up to them before making the final descent, allowing Patrick (an unemployed father of two who drives a 1992 clunker) to cross the finish line first and win the brand new car.

Fans Get to Find Out Where They Are Now

Just in time to sit down in front of a big plate of turkey and sweet potatoes slathered in gravy, The Biggest Loser gives us an inspiring look at past contestants and the journeys the have taken since completing the show. The Biggest Loser: Where Are They Now special episode airs tonight, Thanksgiving Eve, from 9:00-11:00 p.m./7:00 p.m. Central. From marriage proposals to babies and marathons to Ironman challenges, the "Losers" are sharing their stories of transformation and starting over.

Over 30 former contestants will check in including Sam Poueu (season nine) who has a special surprise in store for cast mate and now girlfriend, Stephanie Anderson. Season seven finalist Tara Costa will join 50 other past contestants for the San Francisco triathlon and 5K and 10K races at Treasure Island.

Many of the contestants are now giving back, like O’Neal Hampton (season nine) who started a fitness camp, and season seven’s Ron and Mike Morelli (along with Mike’s brother Max) who now run a kids’ exercise program. And in perhaps one of the most inspiring stories, Sione Fa (season seven) takes his dad to his homeland in Tonga on a journey to meet with the royal family and motivate the Tongan people to live a healthy lifestyle.

And no Thanksgiving special would be complete without food, even if it is Biggest Loser style. Chef Curtis Stone prepares a healthy holiday meal for a group of past Biggest Loser winners.

For other Biggest Loser stories check out:
Bruno Schiavi & Ashley Johnson on the Biggest Loser Clothing Line
Jillian Michaels Transforms America One Family at a Time