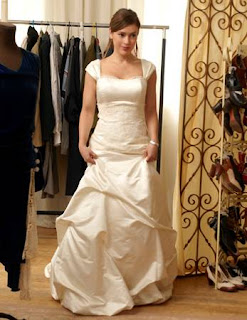 Television veteran Alyssa Milano returns to the small screen again tonight for the Lifetime Original Movie Sundays at Tiffany’s. Based on the bestselling novel by James Patterson, the telepic tells the story of a hard-edged businesswoman who is preparing for her wedding — only to be visited by her childhood imaginary friend.

In a recent conference call interview, we spoke with the former Who’s the Boss

star about what drew her to the project. She explained, “I think the best thing about it is actually how romantic it is. And it’s what I was first attracted to when I read the script. It’s really a modern day fairy tale and it’s such an original concept which I don’t think we see quite often any more.”

and she had filmed a TV pilot with Eric Winter, who plays her imaginary friend in the Lifetime movie.

She told us how much she enjoyed working with them again saying, “To have both of those guys there was awesome — so much fun. We filmed in Toronto so we went to Second City on our days off and saw improv and laughed. Anytime that you are reconnected with people that you’ve worked with before, people that you admire and respect, it’s always a great feeling… It’s a very small world anyway so when you add on top of it this industry which is a very small industry you hope that the people that you really care for come back around.”

And when asked about her legendary co-star Stockard Channing, Milano seemed almost at a loss for words. She finally told us, “She is exactly what you would hope working with Stockard Channing would be like… I was always a huge fan of hers but I’m even more so a fan after working with her. She is lovely and smart. Her instincts are always dead on.”

But what really drew Alyssa to the project was the complexity of her character, Jane Claremont. “I think what I was attracted to when I read the script was that she was hurt in her past and she, out of a protection mechanism… suppressed the romantic that she was. And I really liked that aspect of it because I find the most interesting characters to play are the ones that are sort of flawed that you have to go through this journey. And for me the character was really about her arc… was really about that she was hardened off to love and then through magical circumstances she learns to love wholly again and she softens.”

But Alyssa, who married CAA Agent David Bugliari in 2009, couldn’t really relate to Jane’s attitude about love. “I was never not a romantic in real life.”
For more pop culture stories read:

This is Not the Version of Star Wars We're Looking For

Hollywood is Calling You