Ben Babylon — A Musical Legacy in the Making 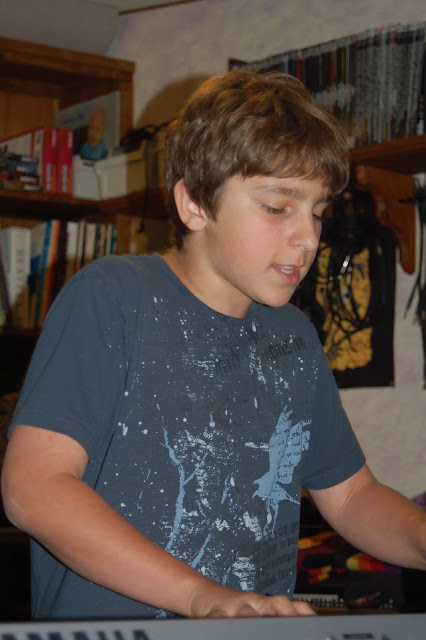 You may not know the name Guy Babylon but you definitely have heard him play. Babylon was the keyboardist with the Elton John band, recording and touring with the legendary musician for 21 years. When he died suddenly in September of 2009, he left behind not only a musical legacy, but a wife, two sons and a daughter. The 53-year-old musician, composer and arranger also passed down his incredible talent to his youngest child, then 11-year-old Ben.

We were fortunate to spend a bit of time with the young Babylon and his mother, Kathy, also a singer-songwriter. And we were excited to get a glimpse of a talented boy, who is clearly on the cusp of becoming an international sensation. 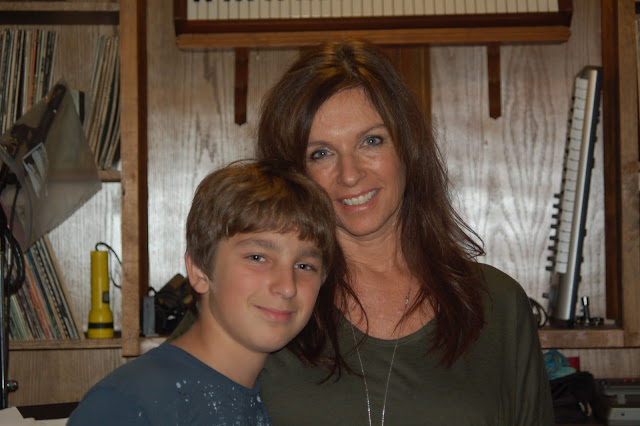 When we asked Kathy to tell us how she and Guy met, she recounted, “He was working with my brother at the time, and I came in to show them a song. So after that I had asked my brother, ‘I have all these songs I need to record. Can you help me?’… And he said, ‘I think Guy’s got a studio, ‘cause I’m too busy now… Why don’t you call Guy?’ And I thought, ‘Okay, great.’ So that’s actually how it all began.”

What followed was a lifetime full of music. Besides his duties with the Elton John band, Guy and Kathy collaborated, and the Babylon family was submersed in song. Kathy summed it up, “Cause that’s pretty much what we do is music. That was our life.”

Read more about Ben after the jump.

As a result, Ben doesn’t remember when he first picked up an instrument. Kathy explained, “Ben was around it all the time and… grew up with it.”

And he wasn’t just listening to music. He was creating it. Ben told us, “I was always sort of writing… and they used to be these horrible little lyrics… And my mom would just write them down for me.” 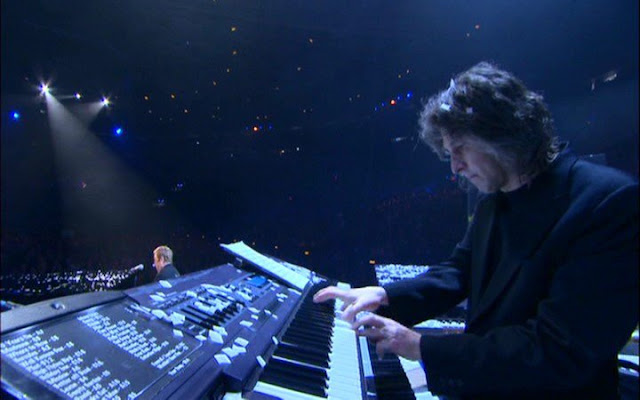 The Grammy-Award winning Guy would also get in on the act. Ben remembered, “After that I just started writing simple little songs… and my dad would just record it.”

According to Kathy, Ben’s dad was incredibly supportive of his son’s emerging talent. “It’s amazing because he was writing like little kid stuff, I would say. And Guy, of course, loved it and would record anything. There’s no judgment. You have a song. Let’s record it.”

Ben remembers one early tune, “I wrote this song called, ‘I Lost My Mind to a High Five.’ I had no idea what I was saying.” Kathy pointed out that it didn’t matter, “If it rhymed it was good.”

But after Guy passed away, Ben seemed to undergo an inexplicable musical transformation. It all started with “Goodbye Superman,” the incredibly touching tribute that Ben wrote for his dad’s memorial service.

Kathy recalled, “When Guy passed away, Ben had like two or three days before the service and he said, ‘I want to write something for dad'… And then he came out with that song.”

The young keyboardist made it clear that he had no other option but to put his thoughts about his father into a song. “Well, there was no really other way for me because I don’t know what to say in regular words. To express everything that I was feeling it had to be in music and lyrics.”

Kathy didn’t hear the original piece until Ben played it at the memorial, and she couldn’t believe her ears. She marveled, “Those lyrics that came out of him, they’re so adult… So, it’s like something completely changed. Something is going on now… I mean his lyrics that he writes just freak me out because they’re so beyond his years. It’s like, ‘Where is this coming from?’ I’m enjoying it. It’s an amazing thing.”

And even Ben acknowledges that his style seemed to be matured over night. He reflected, “It’s probably not coming from me though. It’s something else.” What that something is, even he isn’t sure.

Regardless of the cause of this sudden evolution, Ben is in the process of recording his first album and much of the inspiration is coming from his talented father. He revealed, “A lot of the songs are about some things that my dad said or… something about my dad. Like a song called ‘No Goodbyes on the Road,’ which my dad used to say when he was on the road.”

Babylon played us one of the tracks, which is destined to be on his album called “Write Your Own Song.” And the humble young singer was quick to give credit to Chasen Hampton, one of his mentors, who helped him refine the tune. Ben said, “He helps me a lot with my songs. So ‘Write Your Own Song’ would have been totally different without him because he helped me change this whole chorus and everything.”

Ben’s certainly not going to have a problem coming up with an album’s worth of tunes. As he explained his lack of process to us it became clear that he’s truly prolific. “Say… I am writing lyrics and I go to play music to it, write music to it. So I play some chords, try to figure out a cool chord progression. And while I’m writing that chord progression, I start writing a different one while I’m writing that one. And it can’t go into that one, so I basically wrote another song while I was writing that song. So now I have music. So now I have to write words to it. And say now that I’m writing the words to that music… and then something that’s totally different from the subject that I’m talking about I write, and then I have a different lyric to go on.”

He hopes to wrap up his debut by the end of the year. “During the school’s winter break… I’m gonna try to record a lot so that it’s gonna be finished by next year I hope.”

And he’ll most likely do so with the support of many of his father’s former bandmates. Ben and Kathy have remained close to Elton’s guitarist Davey Johnstone, drummer Nigel Olsson, percussionist John Mahon and bassist Bob Birch. Ben hopes that he might be able to persuade one or two of them to make an appearance on his premiere outing. It wouldn’t be surprising if they did, Ben commented, “All of them are very supportive of me.” 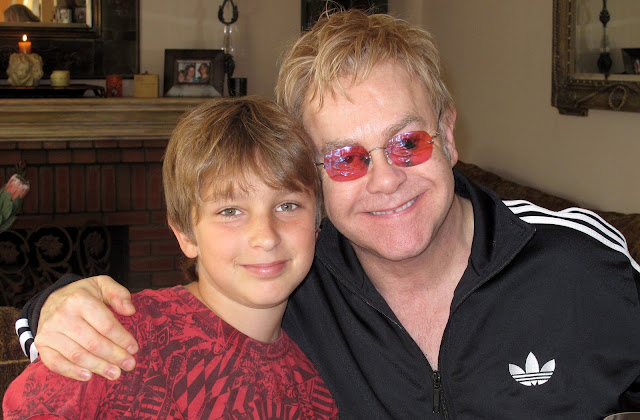 That includes Elton John himself, who invited Ben for a visit when he was recording The Union

with Leon Russell earlier this year. The young singer-songwriter had a hard time defining what meeting his legend meant to him. “I don’t know what to say about it because it was just so amazing. And I don’t know if I was thinking. But it was really cool ‘cause I got to go into the studio and then I got to talk to Elton. I got to meet Leon Russell. And I got to go play Elton’s piano that he was recording on.”

Ben is also being embraced by Elton’s fans worldwide — thanks in part to the webmasters at EltonJohn.com, who keep Guy’s fans up on what his youngest son is doing. Kathy noted, “All the people that are looking on that page are seeing what’s going on with Ben and, of course, they’re interested because of Guy. The whole thing came from the love they had for Guy and now these fans are taking it to Ben…. They see what’s going on. That it’s been handed down to Ben and he’s taking off with it… And they can’t wait to see what’s coming next.”

Luckily for them, there’s a lot ahead. Ben already has a few gigs booked for next year including an appearance at the Shred Kids' Cancer gig Shredfeast in January, where he promises to play new tunes that his loyal fans have never heard before. Soon after he’ll be playing with his school’s Jazz band at a competition in Reno, Nevada. And he’ll no doubt play gigs for Rock Nation, his musical home away from home.

And then in April he’s going to be lending Elton John a little support of his own. Ben’s been asked to be a part of Lunch Around the World in Boston. Kathy said that the event “is associated with Elton’s AIDS foundation… We’re gonna fly out there and Ben’s gonna play…. And all the proceeds will go to Elton’s AIDS foundation.”

What’s to come after that is yet to be determined. But one thing’s for sure, Ben has found his calling. Before we could even finish asking him if he wanted to be a musician all of his life, he answered, “There’s no question about that. Of course I will. I will definitely be a musician when I grow up. I don’t’ care if I’m not that successful but I’m just gonna be a musician.”

We hope so. We love what he’s doing now and can’t wait to see what’s yet to come.

Download "Goodbye Superman" on iTunes and check out the video here: