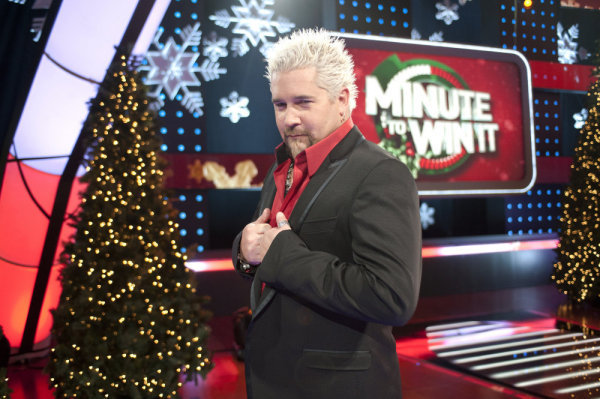 NBC's Minute to Win It is half way through its holiday themed episodes and, so far, no one has won the $3 million jackpot. We spoke with the show's host, Guy Fieri, and from the sounds of it, if he were playing the challenges instead of introducing them he would not be a big winner either.

In our recent video interview, we asked him if he tries out the challenges and if he's any good. "I'm really horrible at anything that has to do with the ping pong ball... Certain games beat me up... but I really do have an appreciation for what kind of gamers these guys are."

Sounds like Guy is better off as the host instead of a player. So has he dreamed of being a game show host since he was a kid? He told us he loved game shows as growing up and used to watch everyone from Wink Martindale to Bob Barker. His favorite was The Gong Show. But he said, "Did I work towards it as a passion? No... So when this opportunity came about, I was pretty blown away."

We also asked Guy who are his favorite TV chef and TV game show host. You might be surprised by his answers. We were. Watch this video to find out, and check out the other clips from our interview with the Minute to Win It host.

For other game show stories check out:
Guy Fieri Gives Fans a Holiday Minute to Win it
An Interview with Who Wants to Be a Millionaire's Meredith Vieira