Lucy Liu Rises to a New Challenge in Marry Me 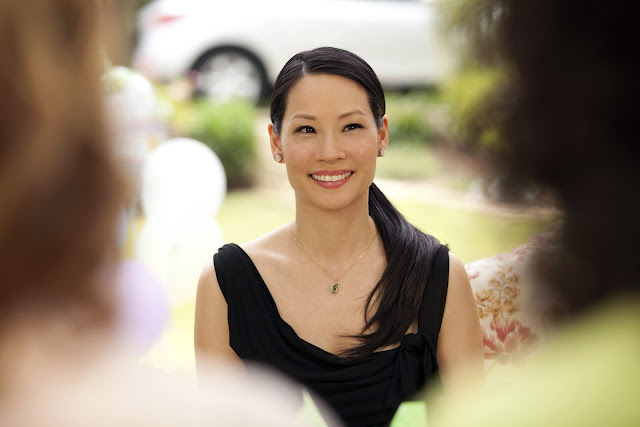 You know her best from Ally McBeal

, but this Sunday night Lucy Liu is trying something different — a romantic comedy TV movie for Lifetime. Marry Me is the tale of a woman who dreams that someday her prince will come and then winds up with three of them. Her new beau, her ex-boyfriend and a romantic stranger all propose marriage and a comedy of errors ensues as she decides which one to marry.

This is a departure for Liu who is known more for drama and action than for playing the leading lady. In a recent conference call interview she talked about why this role appealed to her. She commented, "I've never done a romantic comedy before. That was the first thing that was attractive to me, the idea of doing something that was very different from what I normally do. Other things which I've been the romantic interest in, have been connected to criminal plots or some sort of action. So this is just purely romantic comedy, which is why it was interesting and a challenge to me."

When Liu was offered the part and realized it was a four-hour mini-series, she thought to herself, "Wow, for my first romantic comedy I really am going from 0 to 60."

But after reading the script and realizing they were offering her a part originally written for a blond, southern belle type, she was even more intrigued by the movie. She divulged, "It was nice to be included in something like this because it wasn't really something that they intended to have minority or cross-cultural casting... I'm always attracted to things that were not intentionally for somebody who's Asian... So it feels really good to be thought of because you feel like at least you're breaking boundaries."

After accepting the part, she realized she got more than she bargained for. She revealed that she never expected playing a bride-to-be would be so grueling. "The one thing I learned about romantic comedies is that it's very physical. It's almost as physical as action. But you're not prepared. They don't really train you for that. There's a lot of running around. There's a lot of hi jinx."

She continued to explain that because of the way the script is written, her character often finds herself hiding from one or more of her three suitors adding, "It keeps her juggling and keeps her on her toes and that also was incorporated into the physicality of the movie as well."

In one scene she described that she "ended up squatting and walking across an entire restaurant in high heels... things that I didn't expect I'd be doing, but it works for the scene."

Still the actress did have some fun along the way claiming, "I really love the scenes where we were just able to do full-on dialogue, back and forth banter, His Girl Friday

For other Lifetime stories check out:
Alyssa Milano Stars in Sundays at Tiffany's
An Interview with The 19th Wife's Chyler Leigh