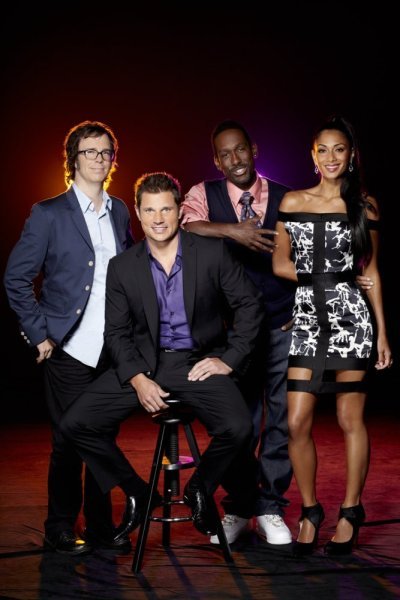 NBC’s competition show The Sing-Off is reality TV’s answer to Glee. Back for a second season, the show pits vocal groups from all walks off life against each other. The second installment of the show started strong in week one with a wide range of competitors — from a 66-year-old seasoned veteran of the craft named Jerry Lawson to a group of high school students from small-town Ohio called Eleventh Hour (who were unfortunately eliminated in week one).

And while the competition is great, part of what makes the show so fun to watch is the panel of judges, who are back to give feedback to the vocal hopefuls. Returning for round two are indie darling Ben Folds, Boys II Men

In an exclusive interview with host Nick Lachey, we asked him what he thought of the show’s illustrious panel. He told us, “They all bring a great deal of personal success. They’ve all gone out and been hugely successful in the their own careers. And they all bring that wisdom and that insight and that wealth of experience to the show.”

And there really isn’t a nasty-Simon Cowell like judge on the show. Lachey added that the contestants “get great feedback and constructive feedback from the three of them as they go through this competition. It’s really helped the groups to get better.”

And if anyone can register a group’s development on the show, it’s Lachey. He’s been singing in the style almost all of his life. He explained, “A capella music is something I’ve always enjoyed being a part of. All the way back to high school I sang in a capella groups. And certainly with 98 Degrees

we always took a lot pride in doing a cappella music and hopefully doing it well."

The Sing Off airs on Mondays and Wednesdays at 8 p.m. EST/9 p.m. Central on NBC.

Here’s more of our exclusive interview with The Sing-Off host Nick Lachey:

Nick Lachey on Getting Involved with “The Sing-Off”

Lucy Liu Rises to a New Challenge in “Marry Me”

An Interview with the Cast of “Cinderella”