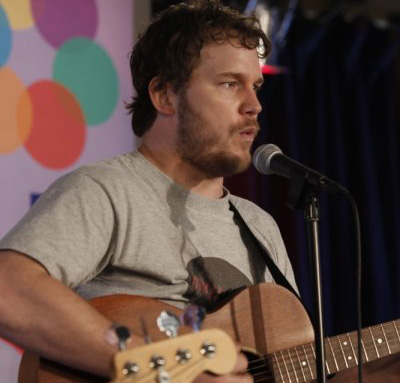 If you read our blog on a regular basis you know by now that besides being TV freaks, we're also big fans of musical theater. So when our favorite television shows mix in a song and dance we are in Pop Culture Passionistas heaven. 2010 saw a resurgence of very special episodes of some of our favorite TV series as well as some striking musical performances on talk shows and other events. Here are our favorite musical moments from the year.

10. Jimmy Fallon and Paul McCartney Sing "Scrambled Eggs"
Most Beatles fans know that when Sir Paul penned "Yesterday" he sang the dummy lyrics "Scrambled eggs. Oh my baby, how I love your legs." So when the former Beatle appeared on Late Night with Jimmy Fallon earlier this month the pair performed a duet of the entire ode to their favorite foods. Jimmy looked like a kid in a candy store while singing with the legend.

9. Mouse Rat Performs "Sex Hair" on Parks and Recreation
Andy's band Mouse Rat got another turn in the spotlight this season at the Pawnee telethon. Leslie's big guest, basketball player Detlef Schrempf, was detained by Tom at the Snakehole Lounge. So Mouse Rat was called in to headline the 2 a.m. to 6 a.m. slot on the charity event. Their performance of "Sex Hair" set off a string of completely inappropriate telethon events culminating in Leslie's mooning the camera on the hilarious episode.

8. KD Lang Sings "Hallelujah" at the Winter Olympics
The 2010 Winter Olympics opening and closing ceremonies in Montreal had big shoes to fill after the summer extravaganza in Beijing. And so they purposefully kept it simple. And honestly, it was a little bit of a let down. The closing event was nice but unmemorable until KD Lang stepped onto the stage and sang Leonard Cohen's "Hallelujah." She brought down the house. No acrobats, no fireworks, no multitudes of choreographed shapes lowering and raising in time to music, just a powerful voice and a beautiful song.

7. The Sound of Music

Cast Reunion on Oprah
For the first time in 45 years, the entire cast of The Sound of Music reunited for an interview on Oprah Winfrey's show. Julie Andrews, Christopher Plummer and the actors who played all seven children came together to talk about the making beloved film. And as if that weren't cool enough, Oprah brought out the Von Trapp Children Singers — a group comprised of the real Captain and Maria Von Trapp's descendants. They sang a stunning version of "Edelweiss" as the cast looked on and footage from the film played behind them. There was not a dry eye in Oprah's house, or ours.

6. The Choir Sings at Royal Albert Hall
The Choir was definitely one of our favorite shows of the year and we're sad to think that the one brief season might be it for Gareth Malone and his underdog singing groups. If you missed it, the show was sort of a real life Glee

with Malone visiting schools and towns with absolutely no musical experience, or even interest, and creating choirs. Perhaps the most powerful was the series of episodes at the Lancaster School, an all male sports academy where they were taught that "boys don't sing." That was until Malone recruited over 100 lads and arranged for them to perform at the Royal Albert Hall. Chills from head to toe.

Visit Yahoo.com to see our picks for numbers one through five.

For relates stories check out:
The Choir Is Filling Our Glee Void
Your Art Could Be on Parks and Recreation