Our Best 2010 Brushes with Celebrity 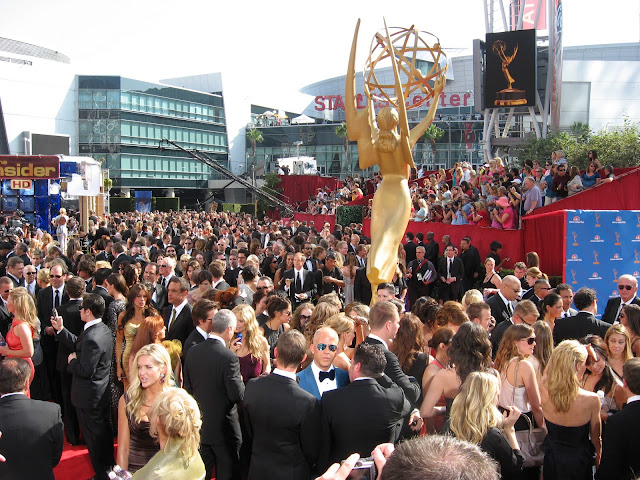 Between living in the Los Angeles area and writing about pop culture as a career, we have had a lot of brushes with celebrity this year. In the past twelve months we've conducted more than 110 interviews with big stars, rising stars and wanna be stars. From the red carpet at the Emmys to jury duty with a pop culture twist, it's been a year filled with idols, unknown gems and several random encounters. Here's our top ten.

10. The Pop Culture Trifecta — Nellie, Mary Ann and Cissy
We hit the pop culture trifecta the night we went to a book signing including Alison Arngrim (Nellie from Little House on the Prairie

). And if we had to choose the best moment of the night it would have to be Alison telling us all about her media feud with Melissa Sue Anderson.

9. A Chat with Bryan Batt
For us Mad Men has made only one big mistake in its four seasons on TV — letting go of Bryan Batt. We loved Sal and were sad to see him written off the show. So we were more than excited when Bryan penned a book about his mom and growing up in New Orleans called She Ain't Heavy, She's My Mother. And then we got the chance to talk to him on the phone. We only got 30 minutes but we could have talked for days. Sadly Bryan's mom passed just this week. Our thoughts go out to him and his family.

8. Advice from Morgan Fairchild
One random day we had just finished eating lunch with a friend as Falcon Crest

's Morgan Fairchild walked in and sat at the table next to us. We had some left over desserts including a large piece of red velvet cake. As we were dividing up the goodies and discussing the transaction, Morgan leaned over and said to us, "Never give up the red velvet." Words to live by.

7. Donald Trump and Alan Alda All in One Day
Talking to either one of these two gentlemen would have had us pretty excited. We've loved Alan Alda, of course, from M*A*S*H

but also from one of our favorite musicals The Apple Tree

. And Trump, well he's Trump. He also happens to be charming and on the mastermind of one of the best reality shows out there — The Apprentice/Celebrity Apprentice franchise. But this time we talked to them back-to-back. A surreal day to be sure.

6. Judge Lance Ito at Jury Duty
One fine fall day we were called to jury duty. And as we awaited our turn, a special guest came into the jury room — the biggest star to ever grace the L.A. legal system — Judge Lance Ito. Yup, O.J.’s Lance Ito. Mr. Media Circus himself gave us a brief lesson on the history of the building we were in, but managed to leave out the parts about the O.J. and Phil Specter trials. Fortunately we were not placed on Ito's 35-day murder case set to begin that afternoon.

5. A Phone Call with The Fabulous Beekman Boys
Planet Green was premiering a new show that sounded interesting. So before even seeing an episode of The Fabulous Beekman Boys we got a 30-minute one-on-one interview with Josh Kilmer-Purcell and Brent Ridge. We thought, sure, why not? So we chatted with the adorable gay couple from New York City who bought a goat farm in Sharon Springs, New York and were living a modern day Green Acres. As soon as we hung up the phone, we knew that they were destined to be reality TV stars. Can't wait for season two.

4. On the Red Carpet with the Cast of Glee
Red carpet events are always exciting. The adrenalin gets going and the heart starts pumping as the limos pull up, the camera rolls and we get to talk to famous people. One of the most exciting red carpets this season was the cast of Glee at the Academy of Television Arts and Sciences. One after another they strolled in as fans screamed across the street. Matthew Morrison, Lea Michelle, Cory Monteith, Chris Colfer, Kevin McHale and the Holy Grail — Jane Lynch. What a night.

3. Our Red Carpet Date with the Cast of Modern Family
This night was pretty much the same thing as the Glee night, but this time the limos held Ty Burrell, Eric Stonestreet, Jesse Tyler Ferguson, Sofia Vergara, Julie Bowen and Ed O'Neill. The cast of our favorite show on TV right in front of our little old microphone. It doesn't get any better.

2. Legends of the Red Carpet — Bob Newhart and Don Rickles
Oh wait, it does. The same red carpet a few months later and we're talking to some of the biggest comedy legends that ever lived. In a special tribute to Bob Newhart, we got to say "Hi Bob" to Newhart himself and talk to some of his best friends including Tim Conway, Julia Duffy, Marcia Wallace, Bill Dailey, Fred Willard and the great Don Rickles. It still feels like a dream.

1. The Mother of all Red Carpets — The Emmys
And just when we thought, "we can't top that," we got invited to the red carpet at the 62nd Annual Emmy Awards. Our heads were spinning from seeing the stars. We were able to interview celebrities from our pop culture hero Joel McHale to comedy legend Lily Tomlin. We spoke to Kevin Bacon, Kevin "Dot Com" Brown, Gail Simmons, Jesse Tyler Ferguson, Piers Morgan, Ann Margret and many more. But perhaps the highlight of the day in the strangest way possible was our few minutes with Dr. Jack Kevorkian. Inside during the show, we did press room interviews with Tom Hanks, Al Pacino, Kyra Sedgwick, Jim Parsons, Eric Stonestreet and Claire Danes. Can we come back again next year?