An Interview with Jason Biggs and Sarah Chalke from Mad Love 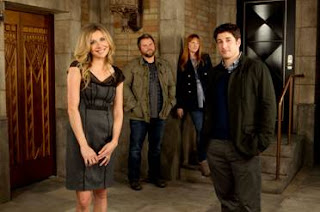 Jason Biggs has spent the better part of the last decade playing an awkward, bumbling teen/young adult in the American Pie

). The romantic sitcom is about a newly dating couple, Jason and Sarah, and their best friends who hate each other, played by Tyler Labine and Judy Greer.

Since Mad Love is debuting on Valentine's Day, we spoke with the two actors in a recent conference call interview about romance. Jason offered up this knowledge gained while shooting American Pie, "I’ve learned you need to wait for the pie to cool off."

The actor admitted, "As a teenager it was certainly not smooth sailing. I really can’t imagine there’s a teenager out there who has a perfect relationship… I was talking to my niece yesterday who I can’t believe that she turned 15. Insanity. And she was telling me about her boyfriend situation and just… it’s high school. And there’s stuff and it’s not always great and it’s tough and it's the time for a lot of firsts…" He joked, "Nothing was perfect then. But as I got older, of course, I became a stud that I am now."

He said that he used his onscreen persona to his advantage in real life, noting, "Girls just assumed that I was a loser… And then I’d throw the mac down, you know what I’m saying? I’d be like, 'Hey baby.' And I’d be all smooth and I’m a romantic… And they’d be like, 'Oh damn.'"

Sarah also confessed to similar ideals, "I’m definitely a hopeless romantic. No feet on the ground, neither one of them on the ground. I think that I always have believed in true love." The actress went on to describe her first date with her fiancée that included a hike to a secluded cliff overlooking Vancouver for a picnic with chocolate covered strawberries, champagne, wine and sushi, and then getting caught in a downpour with no where to find cover. The first date you only find in movies.

As a romantic she was thrilled to find out the show's premiere date. "It was really cool. We found that out [and] we felt so lucky. I think our premiere night was going to be a week later and then they bumped it up to Valentine’s Day and we were all super psyched."

And while the romance certainly plays a big part on the series, the comedy aspect is just as strong. The actors reflected on whether comedic timing is a skill you can learn or in just innate. Jason quipped, "I was born a genius I guess."

He clarified, "Timing is the most important component to good comedy. And I don’t think it’s something you can learn. I believe it’s something that you have or don’t have. However, I do believe you can hone it and improve upon it and play with it and learn how to… use it, but not necessarily start from scratch with it."

He went on to compliment his co-star, "Chalke’s just got it… It’s like insane. Yesterday she was doing the stuff, it was literally Lucille Ball. I was watching Lucy do this like physical comedy craziness. That’s the other important part of comedy, at least the kind of the comedy that I like, is the physical side of it. She’s got the goods."

Sarah returned the praise adding, "Jason is hysterical. Yesterday we did a scene where literally he was supposed to walk into my office and I’m supposed to be standing there stunned… And I could not stop laughing when he came in because he was delivering his lines very funny, in a different way each time."

The actress, who grew up on the set of Roseanne, disclosed that she never really had any formal training, "It was a learn-on-the-job type thing for me. And I feel lucky… I [woukd] just sit there in awe at 16, not really having done anything, watching Roseanne and John Goodman and Laurie Metcalf on what they would do with the script from a Monday until Thursday tape night. And it was just a lucky experience to get to watch such talented people that I respected so much. I at that point felt much more of an observer in a sense than a participator because I was so young and I was so new and a combination of excited but also very nervous and scared… It was a great learning experience."

Sarah also named several other actresses as influences on her career. She remarked, "I definitely feel influenced by people in my life and in my career and in my work. I have such huge respect for many different actors that I find, when you watch them, it just makes you want to go to work and do a great job. And Lisa Kudrow is definitely one of those people for me. Judy and I quote Valerie Cherish on pretty much a daily basis here… I feel the same way about Julie Louis Dreyfus because I feel like she is so funny and so real at the same time."

Jason interjected, "Kudrow is a good one for you. That’s actually a good one... Part of the thing that’s so great about this cast is we all bring something unique to the table individually, and yet collectively, there as a group, we gel and have such a great chemistry and connection and our rhythm[s] meld so perfectly."

Watch the chemistry on Mad Love which premieres on tonight at 8:30 p.m. EST/7:30 p.m. Central after How I Met Your Mother

For related stories check out:
We're Leery of Mr. Sunshine's Premiere
The Creators of Episodes Talk about Matt LeBlanc and More