Lisa Kudrow and Vanessa Williams on Who Do You Think You Are? 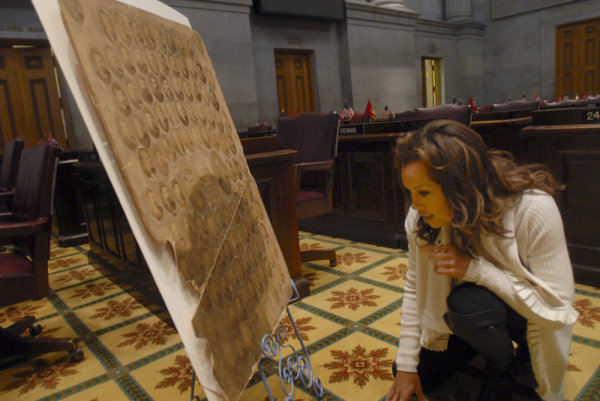 Season two of Who Do You Think You Are? starts tonight and if you missed the first go round you definitely want to tune in. Lisa Kudrow (Phoebe from Friends

) is the executive producer of the doc-style series that helps celebrities trace their roots. In the premier episode Vanessa Williams follows her ancestry back to a slave plantation.

Last season Kudrow traveled to Belarus and found a long lost relative they thought had been killed in the Holocaust. This is some amazingly poignant television. In a recent conference call interview, we spoke with Lisa and Vanessa about why they wanted to look into their heritage and why this show is important.

Vanessa said that prior to agreeing to do the show, she had started to delve into her past. She recalled, "I personally had started my own Ancestry.com family tree probably a year and a half before any of this, so I was always interested, but I didn't have the luxury of having a team of researchers do the lion's share of the work, which is that was truly lucky for me."

And Lisa told a similar tale, "My father, actually, had spent years going to the Mormon temple here in L.A. and getting a lot of documents and made an extensive family tree. But again that's mostly names and dates, which is great. But to me what's fascinating and what drew me to this show when I first saw it was that it's not just names and dates. You can actually understand a lot about what your family was going through and what was happening in their world that made them make some important decisions that changed the course of your lineage."

star discovered that both of her great-great-grandfathers played a role in U.S. history. On her mom's side David Carl fought in the Civil War in the 26th Colored Infantry. And her dad's great-grandfather was one of the first African American State legislators. She remarked, "The fact that I had the luxury of researchers, of being able to flesh out both of these stories were phenomenal and they made me extremely proud because these are men that were heroes. They took risks and had an extraordinary legacy that we can still talk about and be very happy for."

She continued, "Finding out whether one of your ancestors got the chance to serve in the military, in particular the Civil War aspect, was phenomenal that black men were not allowed to serve. And it was truly a gift once, in 1863, when they were allowed to serve… My great-great-grandfather signed up as soon as he could possibly do it, to help ensure freedom for people in the South. And he was born a free man. And the fact that he took that risk himself [not only] to be killed in battle but also to be enslaved if he got caught in the South was extraordinary."

The actress expressed how important she thinks it is for every one to know their family history. She declared "I hope it's a history lesson for people. I hope that it inspires them to ask questions and to start their own research. And if they don't have the tools, there is plenty of avenues that can help them find out what the mysteries are for their own families."

She also plans on passing along the stories of her heritage to her family. She noted, "I'm one of the lucky ones that actually have images. That was one of the amazing things that I got a chance to see in my journey, is to have two pictures of both of my great-great-grandfathers. So I have copies of those that I can make for all my cousins and my surviving aunts and uncles to talk about our family tree and to really put faces. And also, we've got tremendous amount of research that the researchers have done that we've got a huge dossier, so there are literally letters and documents that I have copies of that we certainly didn't have before. So I'm really lucky. I think I have a wealth of knowledge right now."

Lisa hopes the show will encourage people to document their own history. She related, "I know there a lot of older families, who it's part of their heritage that they already have a genealogy book on their family. And now we can all make one for all our families and thanks to Ancestry.com and a lot of other sites, we can collect documents."

During their journeys while making Who Do You Think You Are?, both Lisa and Vanessa considered the age old question of nature vs. nurture. Vanessa made some discoveries that proved to her certain traits are in our genes. She explained, "It was really highlighted when I was reading the minutes of the courts when William A. Fields passed away who was my great-great-grandfather. And the description of how devoted a man he was to his wife, to his children, to education, to making a difference in the community, to being a solid man. And that one sentence that says, 'He left a spotless name,' that was eerily reflective of my father and who he was as a man and the legacy that he left as a teacher and how many lives that he had touched… So that's particularly one opportunity where you can see where it's almost like, is this a DNA thing? Have we passed this same quality down generation after generation? Because I come from wonderful, warm, gentle men who love their wives, love their children, and provide and are strong, valiant men. And it was wonderful to see it actually illustrated on paper during our research."

Kudrow acknowledged that both sides of the argument were reinforced by the show. She stressed, "I don't believe that it's either nature or nurture. It's always a combination. Your nature determines how you respond to your environment and so I think they're both really important. I think you do see some things that look like that's not just a coincidence. That's somewhere in your hardwiring, when you look at a lot of these episodes just like Vanessa was just talking about. But I think it's also important to see the conditions the people were raised in, how they were parented, if you can draw any conclusions from that and then to see how that gets passed along. What a person's response to their environment? How that gets passed along to the next generation. I think that's very real."

The women hope that viewers walk away from the show with a newfound interest in history. Vanessa stated, "I'd love them to get a quick history lesson on black history in terms of black service in the Civil War and the consequences and the dangers and also black legislation within the 1800s and that they were men of color that were trying to make things better for other former slaves in their lifetime."

Lisa added, "When you personalize history with these stories then it has so much more impact… Because it wasn't something that happened to strangers a long time ago and it has nothing to do with you."

Season two of Who Do You Think You Are? premieres tonight at 8 p.m. EST/7 p.m. Central on NBC. Tune in every Friday to see the other celebrity guests including Gwyneth Paltrow, Tim McGraw, Rosie O'Donnell, Steve Buscemi, Kim Cattrall, Lionel Richie and Ashley Judd.

For related stories check out:
The Creators of Episodes Talk about Matt L
Our Picks for Most Promising 2011 Midseason TV Premieres