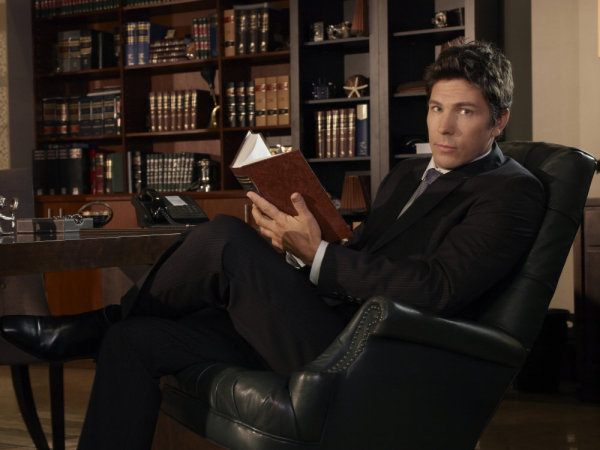 Michael Trucco has been acting for over 15 years and has appeared in numerous movie, television and stage roles. But to some fans he will always be Samuel Anders from Battlestar Galactica

. So when he recently was given the part of Justin Patrick on the USA Network drama Fairly Legal, die-hard Trucco followers questioned the choice. This is a futuristic warrior, not an Assistant District Attorney. What is he thinking?

In a recent conference call interview, Trucco explained exactly what he was thinking. "No gun wielding [or] car chases in this season so far. It’s great… I like the diversity of the roles, coming off a character like Anders in Battlestar Galactica and then jumping into something like Justin on Fairly Legal. It’s 180° and I like that. I like the idea that I don’t always want to get pigeonholed into playing that same character. Although I love the action roles and I love the hero, I just want to keep trying something new with each project. And this was the one that presented itself to me and I’m happy to be here."

Trucco went on to note the similarities in the characters of Anders and Justin. At first he quipped, "They’re both played by the same actor." But he then reflected, "There’s a through line in just about every character that I play. I like to try to bring a fierce [sense] of purpose and loyalty to the character… I hope I was successful in doing that with the Anders character and we’re so early on in the run with Fairly Legal, but I like the dichotomy of the Justin character. Kate flies off the handle… and Justin… takes an approach that is more pragmatic. He has a fierce sense of duty."

The sci-fi star admitted to a sense of obligation to his followers after making such a dramatic character shift. He stated, "That’s probably fair to say that there is a certain amount of pressure to deliver your next role when you do have a fan-base as potent as the Battlestar Galactica family. There was certainly a lot of curiosity to all of us on that show — what are you going to do next? Where can we see you next? That was a question we got more often than not."

He recalled that after Galactica he gave the matter a lot of thought, but realized, "Oftentimes, actors don’t have the luxury of picking their part. You go from one project to the next and you hope that you find one that fits you and that you’re suited for. This one came along. And it’s so early in the season that I don’t know… if it’s going to be embraced by the fan-base, but I’m hoping it will."

Trucco revealed that he is unaware of the audience reaction so far. He confessed, "I haven’t really taken the pulse of the audience, but that’s just probably for lack of trying. I imagine there is some feedback. I haven’t heard anything directly. I don’t know if this is in the same genre. Clearly the shows are two different entities all together, so I don’t know if the audience that were rabid fans of BSG would necessarily follow blindly into Fairly Legal, but I would like to think that they would come…  watch the show out of curiosity."

The actor still corresponds with Galactica fans at conventions and through email and he pointed out that most of them say they are, “Looking forward to Fairly Legal.” He remarked, "I think there is going to be a large portion of those fans coming to check us out, but I can’t speak to it. I don’t really know. Maybe no news is good news."

And though he has moved on as an actor, Trucco can’t let go of his inner-Anders completely. He divulged that he'd like to see some kind of subtle nod to his BSG history. He said, "I’m hoping at some point we could put [in] a little reference… In certain scenes, there might be a prop in the background or something that in set dressing that is a reference or the set piece that came off of the set."

He continued, "Those things are fun. You don’t want to overdo it. You also don’t want to distract from the purpose of this show. It can be overdone and then it can become invasive. But, there’s certainly a door open there with Baron’s character, Leo because he is so to speak the target audience of a show like Battlestar Galactica. So we joked around it’d be fun to put an Anders action figure on his desk… We’ll see."

To watch Michael Trucco in his latest role, tune in to Fairly Legal on Thursday nights at 10 p.m. EST/9 p.m. Central on USA Network.

For related stories check out:
An Interview with Fairly Legal Creator Michael Sardo
Our Picks for the Most Promising 2011 is Season Premieres