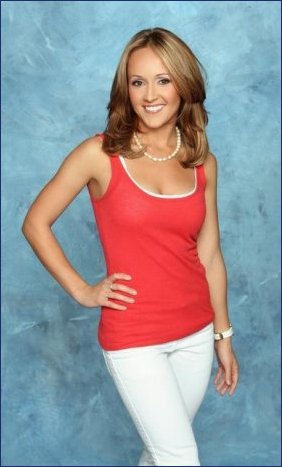 Last week Brad Womack gave one more girl the boot on The Bachelor. As the numbers dwindle, each elimination gets more and more shocking. But even Brad admitted that he was surprised that Ashley Hebert didn’t make it to the final two. Instead Chantal O’Brien and Emily Maynard will be battling for Brad’s final rose. In a recent conference call interview Ashley talked about her South African date, the dwindling connection with Brad and whether or not she’d like to be the next Bachelorette.

But unfortunately for Ashley H., her date came after Emily’s, and Brad clearly had fallen head over heals for her on their date. Had she gone out with Brad first in South Africa, Ashley believed it would have gone a little differently. “Since I was directly after Emily, he was done for. I think that he fell for her. He knew what was going to happen and I think part of the downfall of that date had to do with him falling in love with her directly, right before. I think that he had stronger feelings for both Chantal and Emily — stronger than what he felt for me. So I don’t know if it would have changed the end result, but I certainly think the quality of our date would have been a little bit better.”

When push comes to shove, she felt that the reason their date went south was because Brad was looking for reasons to let her go. “Him coming down on me that night had nothing to do with me moving to Austin. I think he just really felt strongly for someone else and he wanted to highlight all the reasons why we wouldn’t work out as a way to kind of not lead me on.”

She said she believes that’s an important lesson that Womack learned from his Bachelor experience. “I actually really do feel that Brad went through it the first time and people gave him a hard time for dragging girls along and I think once he made his decision in his mind he wasn’t going to try to string me along. That night at dinner, it was very clear that he had a lot of questions and he wasn’t trying to pretend that everything was okay when it wasn’t. So I think that I think he fell in love with somebody else. I clearly see it with Emily that day before, so I definitely think that he fell in love with someone else and didn’t want to string me along and I completely respect that.”

She also takes responsibility for the love match not working out. “No doubt, we had something that was really, really strong. It went very unspoken. It was something that we could have had a really great relationship. I think that throughout the process I never handled it well. I never made good use of our time. So I do take responsibility for a lot of wasted time, which I think ultimately ended in me going home. “

And she admitted the she just didn’t feel she was at the point where she could express really intense feelings for Brad. “I personally didn’t feel like I was ready to say I love you. I think love means so many different things to so many different people and in that moment, I couldn’t say that I was in love with him. I think I was falling in love with him, but I couldn’t say it to him. I don’t know if it was because I was guarded. I don’t know if it was because I was just feeling it, but what I can say is that when I got home, I realized that I did love him. But at that point it was too late. What was done was done. What was said was not that.”

Ashley H. wasn’t shocked that Brad let her go after their last date. In fact, she contended that she saw it coming. But their fizzling spark is something that she hadn’t expected. She revealed, “I was surprised that from start to end that it came to this; that it came to just our relationship falling apart.”

Since Hebert didn’t find love with Womack and is still single in real life, she said she’d consider participating in the other shows in the Bachelor franchise. “I don’t think I would be as happy about Bachelor Pad, but if they asked me to do The Bachelorette. I would definitely consider it. “

And if asked, Ashley H. does feel that she has something to contribute. “Despite what I think most people think, I’m actually a really confident, secure person. I think I do have a lot to offer… I don’t want to toot my own horn, but I think I’m a pretty fun girl to be around. I get along really well with people. I know I have learned so much from the show. I feel like the show really primed me to start dating again, so that’s something that I’m really excited about.”

So if asked, she believes that she could deliver, “I think I would have a really good time with them. I think that they would be really happy with the end result.”

Of course, taking on the show would impact her dental career. “I think that if I did decide to do it there would have to be a compromise in my education. I’m planning on graduating in a couple months, so ultimately, I’d probably have to weigh the pros and cons and I would be taking a little bit of time off from school, but in the end, I will be graduating and getting a job. Dentistry is the number one thing in my life right now, so I will never kind of veer away from that.”

And there is one more alternative. If Brad once again doesn’t pick one of the finalists or if the lucky lady doesn’t choose him, Ashley H. could get a second chance. “I’ve come to realize that we are very different people and I think ultimately we both want very different things out of life, so I don’t know if I would ever…. consider dating him again, but who knows?”

Ashley H. and the other girls will bare their souls tonight on The Bachelor: The Women Tell All on Monday at 8 p.m. EST/7 p.m. Central on NBC.