Sherri Shepherd Dishes on 30 Rock, the Real Housewives and The View 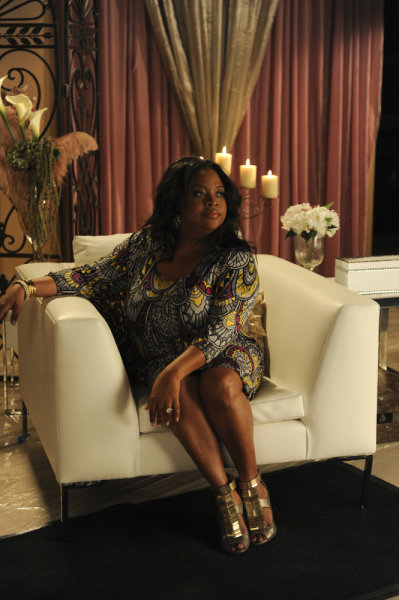 Sherri Shepherd was working as a legal secretary in 1990, when she decided to start doing stand-up comedy. Never in her wildest dreams could she imagine that twenty years later she’d be co-hosting a hot daytime talk show like The View, shooting another sitcom pilot, hosting The Newlywed Game and making regular guest appearances on 30 Rock. We were part of a recent conference call interview with Sherri, who talked about her character Angie’s reality show Queen of Jordan, the ladies of The View and The Real Housewives.

Here are some of the highlights of that chat:

1. On Her Well Rounded Career
“Each medium is so different. And I love doing everything… I love being on The View. That's something where I get to share my opinion and talk with girlfriends. And then I get to go over to the other side and play and be an actress and get to play this crazy, crazy person named Angie Jordan. And then I get to go and do a film like Precious and bring out the dramatic side. So it is really fulfilling. When I was a legal secretary and dreaming about this in my wildest dreams I never thought that I would be blessed to do so many different things.”

2. Being Intimidated on The View
“Being on The View was probably a little bit more intimidating [than acting] because sometimes you say your opinion and you get in a lot of trouble. Joy Behar said to me my first day, ‘As soon as you open your mouth, you're going to lose half your audience.’ And we have found that out. I give my opinion and I get a lot of people who go, ‘I will never support you in anything you do.’ And then some people love it some people hate it. So that's always a little bit more intimidating to go out there every day and be fearless and state your truth and hope to goodness that everybody knows you and doesn't hate you that day.”

3. Giving Her Opinion on The View
“That's what I'm paid to do. I am paid to give my personal opinions. If none of those ladies sat at the table, if we didn't give our opinion, it’d be a pretty boring show. And so you have to learn to get a hard shell is what I would say. We don't take it personally. We get along really great because we respect each other. And I just learn to state what my truth is. My truth is not everybody's truth.”

4. On Being Truthful in Her Work
“I've always done it in my stand up. And I think any person who does stand up and is successful at it has to tell the truth, has to tell what their truth is. And I've been doing that since I first stepped onstage being truthful about my life and kind of letting people into what's going on in my life. And that's why I had a sitcom. I had a sitcom based on my stand up of a lot of people don't talk about that they’re husband cheating on them and then leaving and having to raise a kid. And so I think it becomes pretty natural. I think when I first guest hosted on The View that's the first thing I talked about. ‘Hey my husband cheated on me. What about you?’”

5. On Her Favorite Reality Shows
“I like Top Chef… I cry every Sunday at the show were they build the houses… [Extreme Makeover: Home Edition

].  I mean I'm sitting there and I'm always tweeting going, ‘Oh my gosh, the human spirit just absolutely amazes me.’ Dancing with the Stars is my show and any dance show. I'm not so much into the shows where you've got a bunch of people fighting.”

6. On the Real Housewives

“I don't like those kind of shows which is, actually [her 30 Rock reality show] the Queen of Jordan, it’s one of those shows but I'm not a big fan of the Housewives shows because I look at these grown ass women and I'm going, ‘What the hell is wrong with everybody?’ You guys get the craziest people to put on these shows. So I'm really not into those shows where they don't know how to control themselves. I'm more into shows that inspire people, that uplift people and encourage people. I walk away from any Housewife show and go, ‘This is just ridiculous.’”

7. On Spirituality
“I wouldn't say I'm religious. I have my faith. I never try to bash anybody over the head with my faith. And I feel it's a blessing to be in this industry. I get to do things that make people laugh, that encourage people that inspire people. Every day I just go, ‘What am I supposed to be doing?’ Now you won't see me rolling around in the hay. I'm not going to be doing any full frontal nudity. Number one because I'm a little older now. Maybe if they'd have asked me when I was in my 20s and everything was sitting up under my chin really nicely. But yes there's just certain things I just say no to if it goes against what I believe in.”

9. On What She Wouldn’t Do
“What's off the table for me? There's not a lot of things that are off the table. I'd like to try a lot of everything. I think anything for me I want something that my nieces and nephews always can come and watch me in. I looked at Black Swan

and I immediately I thought good for Natalie Portman because there is no way I could even pulled any of that off. So some things I just know. I know the lane that I swim in. And my thing is I make people laugh. So that's pretty much the direction I'm always going in.”

10. On The Ladies of The View
“As soon as we leave The View we have to go and work so we don't get to hang out as much, which I hate. I keep telling everybody, ‘Can we do a slumber party? Can we go bowling? Can we play softball?’ So just trying to get everybody’s schedule together is not - it's a little hard now. Elizabeth and I hang out because we have kids the same age. Jeffrey goes swimming with Taylor, Isaiah and Grace. And we actually had dinner at Elizabeth’s house.”