Sutherland, Johnson and Driver Sign on for Pilot Season 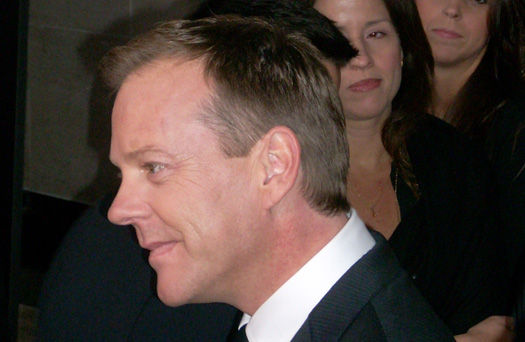 It's pilot season and Hollywood is quickly attaching some big names to hopeful TV projects for next season. We are crossing our fingers that some of our favorites stars will be back on the small screen by year's end. Here's a rundown of the shows we are rooting for.

Kiefer Sutherland in Touch (FOX)
With 24 firmly behind him and a stint on Broadway in Jason Miller's That Championship Season wrapping up, Kiefer has signed on to star in a new Fox pilot. Tim Kring, the creator of Heroes

, is behind the project about an autistic kid who can predict the future. Kiefer plays his dad in the sci-fi thriller that has big promise.

's Don Johnson is trying his hand at TV again by playing a Warren Beatty-like hairdresser. The Beverly Hills stylist is struggling to remain hip among Hollywood's younger crowd. The pilot, which sounds like Shampoo

meets Men of a Certain Age, is the brain child of Sex and the City

creator Michael Patrick King. He's got a great track record but the jury's still out on the success rate of this concept.

Eric Roberts in Grace (ABC)
This one really could go either way. And depending on your tastes this pitch sounds like the greatest gift to TV or the worst piece of... well you know where we're going there. Eric Roberts stars as the patriarch of a professional dancing family. Think of it as Parenthood, So You Think You Can Dance and Glee all rolled into one. And speaking of SYTYCD, Mia Michaels has signed on to choreograph. It is executive produced by 8 Simple Rule

's Flody Suarez, Dancing with the Stars' Carrie Ann Inaba and Grey's Anatomy's Krista Vernoff. Hold on to your jazz shoes, it could be a bumpy ride.

Minnie Driver in Hail Mary (CBS)
We admit, we've never been huge Minnie Driver fans, but we really did love her last foray into TV land on The Riches. Sadly it didn't last long. So we're hoping her next attempt fares better. In Hail Mary she plays a suburban mother turned private eye. The series showrunner created Showtime's The L Word

and Joel Silver and Jeff Wadlow are acting as Executive Producers. Hopefully this will be a Hail Mary pass for the actress.

Christina Ricci in Pan Am (ABC)
Following in the footsteps of Mad Men, Pan Am is a '60s era period piece revolving around the world of the mid-century airline. Ricci has signed on to play a flight attendant. This is Christina's first time taking the lead on a TV series, but she has some strong people behind her. ER

's Jack Orman has penned the script and will act as EP, while Thomas Schlamme of West Wing

fame is directing the pilot.

fans, many members of the cast are busy shooting pilots. Nestor Carbonell who is working with Sarah Michelle Gellar on Ringer. Jorge Garcia is doing Alcatraz with Sam Neill and Santiago Cabrera. Cheech Marin is working on the Fox comedy Outnumbered. Henry Ian Cusick has joined Shonda Rhimes (Grey's Anatomy) new untitled project. And the incomparable Michael Emerson has taken the lead in J.J. Abrams' new pilot Person of Interest.