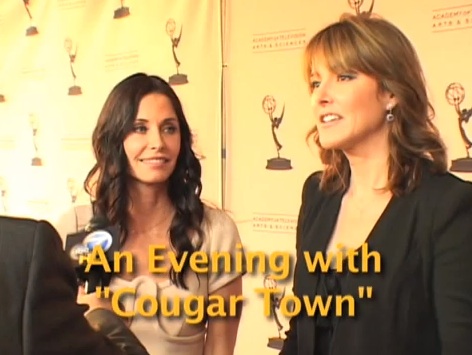 Cougar Town fans are most likely familiar with the Penny Can game, in which the phrase is shouted after a player successfully throws a one cent coin into an empty paint can. Yup, that’s the whole game.

In a recent episode the not so bright Bobby Cobb and the not so nice Laurie Keller teamed up to market the novelty to make some quick cash. They included a phone number in their radio spots — 1-855-PENNYCAN.

People who were watching with a little extra time on their hands probably tried to dial that phone number. If they did they must have been pleasantly surprised. The digits were tied to an actual cell phone that was being passed around among the stars and producers of the Courteney Cox show.

Lucky callers who connected got to speak for about ten minutes or so with whoever answered the phone. That is, of course, if weren’t sent to Bobby’s already full voicemail.

We were on the red carpet at the Cougar Town event at the Academy of Television Arts and Sciences this week while the phone was in play. Series creator Bill Lawrence talked to us briefly about what he calls the “world's worst grassroots marketing idea,” before interrupting our chat to answer a fan’s call. Catch part of his conversation in this exclusive video shot on behalf of the Archive of American Television and give the stars a call, you might just catch them.