William Shatner Is at it Again 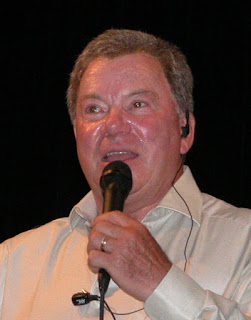 Photo by Salvatore Capalbi from Italy

When we were in college we had a friend who made it his mission to use Star Trek as the basis for every paper he wrote. Whether it was for a communications, English or Political Science class, he planned on looping it all back to Captain Kirk and Mr. Spock. Shockingly he pulled it off.

He was also the guy that turned us on to William Shatner singing “Lucy in the Sky with Diamonds.” He would silence a room of crowded college kids, so that everyone would be forced to bask in the glory of that performance. Had the Internet existed back then, he probably would have plugged a computer into a flat screen TV and made the partiers watch Shatner’s “Rocket Man” duet with himself. Sadly that wouldn’t be possible for a few (or more) years.

We lost touch with that kid after college but can only imagine that he wore out his CD copy of Shatner’s brilliant 2004 release, Has Been. Guided by Ben Folds, Shatner collaborated with Joe Jackson, Henry Rollins and Aimee Mann to produce a truly classic pop culture gem.

Now Shatner has announced he’s got another album in the works. This one is called “Searching for Major Tom.” That sounds like heaven already. The cover tune laced release seems to have something for everyone. Here are a few of the highlights courtesy of WilliamShatner.com:

The Thomas Dolby classic “She Blinded Me With Science” will feature Bootsy Collins on the bass.

Steve Miller’s “Space Cowboy” will mark the return of one of Shatner’s Has Been collaborators Brad Paisley on guitar and vocals.

And the Norman Greenbaum number “Spirit in the Sky” will include Peter Frampton on guitar.

It sounds like the kind of audible acid trip that we’ve come to love Shatner for. Sadly we’ll all have to wait until later this year to see if it stands up to his other masterpieces.

So Many Reasons to Love Henry Winkler