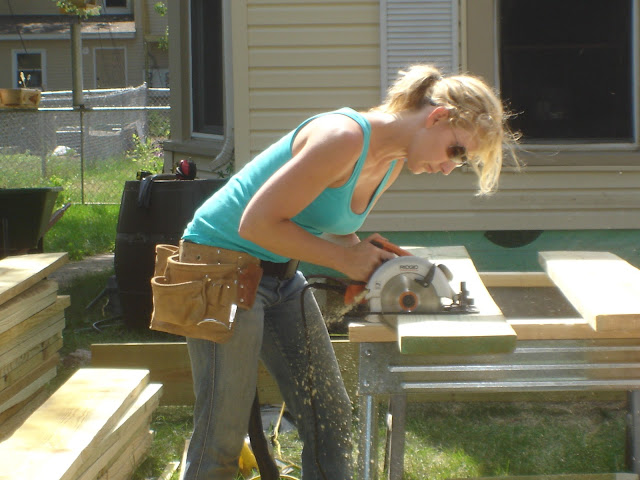 Amy Matthews is a rock star in the Do-It-Yourself world. As the host of several shows for the DIY Network, she is one of the few female carpenters in a male dominated arena. In a recent interview the star of Sweat Equity and This New House discussed how she got intro DIY, what the challenges are in making a show like Sweat Equity and why her job is similar to marriage counseling.

Matthews got an early start in home building by spending a few weeks each summer as a teenager with a group work camp that would travel across the country repairing or restoring properties for families in need. And while she acknowledged that part of the appeal as a 14-year-old girl was meeting cute boys, she claimed, "It was a pivotal turning point in the beginnings of my DIY. "

Matthews' father was also partly responsible for her career path, "My dad is a huge DIY-er… He is such a perfectionist. He just helped my sister renovate a bathroom… and it's meticulous. And I thought, 'You know I think there's something that's genetic.' He has this sense of the perfectionist." She revealed she hopes this is a gene her child will inherit when she has her first baby later this year.

Amy learned a very important DIY lesson from her dad. "Anything I teach people now in DYI is how to make it look like a pro did it. That's kind of the point. And if you can’t do it, please hire it out. Because I want people to get, number one enjoyment, but also a great value for what they do. And the value comes in it really looking good and being able to pass on quality work. My dad always instilled that in us."

Surprisingly, despite her early influences, Matthews did not go directly into carpentry after high school. In fact she studied opera and acting at Boston University and the American Musical and Dramatic Academy in New York. When she started to audition for TV roles, her two worlds collided. She heard about a job hosting a TV show — they needed a carpenter with on-camera skills. This was the perfect gig for Matthews. She declared, "[With] DIY and HGTV it's always the idea of education and entertainment together. So you have to be able to have both."

Amy explained what sets Sweat Equity apart from a lot of home renovation shows. Rather than a crew coming in and taking over for a week to get a project done, she clarified, "We are tracking reality." She said they work with the couple that is actually contracting the project on their own. The show simply sends in a camera crew when various parts of the project are about to take place. Amy remarked, "The coordination of shooting a show like Sweat Equity when it's actual real people, in real time, doing these real things, is pretty amazing. I have to hand it to my production company for how they coordinate."

She added, "The coordination is challenging, because we just want to make an entertaining show that has a lot of educational value at the end of the day. And making that happen is sometimes magical and sometimes really challenging."

Before shooting begins, Amy and her producer pick portions of the process that she will take part in. "[It may be] the actual doing of certain technical things that might be harder for them, a teaching point, something that we find is interesting for the viewers on a big scale, that maybe we haven't seen before or is unique to their project."

She did admit that sometimes it's difficult not to interject her opinions when the couple is headed in the wrong direction on a part of the project she is not involved in. She likened it to a cameraman on Survivor who might want to warn someone not to eat something or divulge another player's strategy. She noted, "We're watching these crazy things happen and we, of course, want it to go well so we're supporting them in every way that we can… So if something happens on set we say 'catch it' because it's a teaching point."

Amy also divulged that her favorite part of shooting the show is the human interaction. "The drama between the homeowners is actually what, I have to admit, I love. I do." She continued, "I don’t egg it on. If people are getting along, I will never make [it into] something that looks ridiculous. But if it's not, they'll say something about each other and I was like [to the camera crew], 'Did you guys catch that? Were you rolling while that was going on?' Because suddenly you get into an interview situation and [the couple is] like 'On, no. We're doing really well and everything's fine…' So it's kind of marital counseling and construction all at once."

The host offered advice for the couples on how to get through the process in harmony. "Find what your strengths are and give each other a little bit of break. And find joy in what each of you do, because if you try to decide on everything together you will lose your mind."

She also cautioned, that people need to take their long-term plans into consideration during renovations. "Sometimes in Sweat Equity, the value doesn’t come for some reason. They may go over budget or they decide to do a project that might not be able to hold its value within the comps in the neighborhood. Sometimes it's because they want to stay there for 25 years and they don’t really care… and I'm like, 'Then go for it.' Part of doing the right project is doing the right project for you and how long you’re going to stay there… Sometimes, in certain projects, the more money you spend the more you do make because if you put your money into the right places you will get that value back. So it's not always about just keeping the lowest budget."

Get more tips from Amy every Wednesday on Sweat Equity at 9 p.m. EST/8 p.m. Central on DIY.