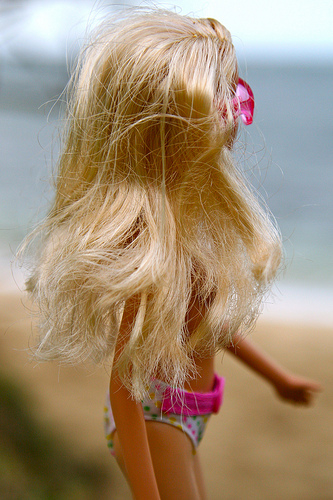 Come and listen to a story about a doll named Barbie. It seems when you’re at the top of the vinyl figurine heap, everyone wants a piece of you. And the world’s most famous tiny, inanimate blonde bombshell is currently under attack from the actress behind one of TV’s most iconic characters — Elly May Clampett.

Donna Douglas, who played the cement pond lover on The Beverly Hillbillies, sued toy manufacturer Mattel this week after a themed Barbie that she says bares her resemblance. Donna wants $75,000 in damages because she says that Mattel is engaging in unauthorized use of her name likeness and image for the Elly May Barbie. They even allegedly use Douglas’ name in the packaging. Mattel, for their part, says they licensed the Beverly Hillbillies rights through the “appropriate channels.”

Still it’s not that surprising that Donna’s upset — she’s still trying to capitalize on the Elly May likeness and image herself. Now what could help her get a little publicity to spike her autograph show signing fee? Hmm… a lawsuit against a manufacturer that leads to being the leading trending topic for the first time in her career?

Whether she wins the lawsuit or just ups her profile, it seems Douglas won’t be a poor mountaineer for much longer.
Posted by Pop Culture Passionistas at 2:00 AM