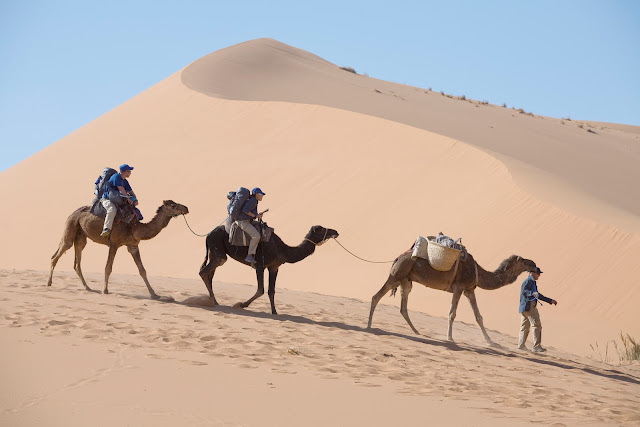 If you've heard anything about Expedition Impossible, you might be inclined to think that it's a little bit familiar sounding — maybe a bit too much like The Amazing Race. Well we’re here to tell you to think again. The new adventure series is the brainchild of Mark Burnett (Survivor, The Voice) so you can pretty much be guaranteed that he will take the genre and inject new life into it. We’ve seen the first episode, and while we are sworn to secrecy for fear of being dropped in the Moroccan dessert without a camel, we can tell you that Burnett has done it again.

In a recent exclusive interview Mark explained that he wanted to infuse the genre with "the flavor of Indiana Jones" and he has achieved that goal. He's been working on the idea for several years and described the thought process behind it. "I've always loved adventure shows. And before I ever did Survivor, I did a very different kind of physical [show] called Eco-Challenge, where extreme professional athletes attempted big mountains and big things. And I felt, 'How can I do something that's very adventurous without putting people on an island and having them have an Indian Jones adventure?'"

He continued, "After working with my team and developing it we came up with Expedition Impossible. So it will be ten stages over ten episodes and the last team at the end of each stage is eliminated. And along the way within a team of three if anybody quit, the entire team would be eliminated and that would put the pressure of them to stay together and help each other, which also drives story. And in the backdrop you try to help them do things, which seem like 'Are you kidding me?' Like crossing the Sahara dessert, that big sand dune, which is like a mountain, and then get on camels and be responsible for your camels, then have to find water in the dessert and then repel down a giant cliff and then that snake challenge was cool, all the cobras, count the number of cobras in the middle of the mountain. I thought it was really fun and fresh."

Burnett chose Morocco for its diversity. "You'll see in episode four when they get into the High Atlas Mountains, there's major snow storms. They're really up to waist deep in snow at times, which you never would expect that you were going see snow in North Africa. Plus I thought camels were a great idea because camels are such an unpredictable animal. It wouldn't matter whether you were the best, strongest person in the world, you have to deal with the animals, so it really levels things up… and great horses and fast moving rivers, so again, a great diversity of opportunity and I really just feel, based upon movies we put our cast on a romantic adventure… very Indiana Jones."

And he couldn't just drop these ordinary people into the dessert without a competent guide, so he chose Dave Salmoni as the host. He noted, "Dave I've known of for his Animal Planet work and I wanted someone who authentically belonged in the outdoors. Dave's an animal trainer you'll see him on lots of talk shows and stuff and he's done a lot of these remote expedition shows on Animal Planet. I couldn't see someone who didn't fit in that adventure, romance of Morocco, who looked out of place. And I felt they had [to have a] lovely spirit and someone had to be great."

Clearly Burnett has succeeded at creating his Indiana Jones fantasy for these 13 teams. Once again, redefining the genre he was instrumental in creating. We asked him what he thought his biggest contribution was to the genre. He replied, "I think it was really from the beginning, Eco-Challenge and then Survivor right behind it, was I felt showing that without scripts and actors it could still be valuable entertainment on primetime television. When Survivor first came out, America was saying, 'Everything is going to be like that on television now,' because there was so much viewers for Survivor. But I always knew a really healthy network TV lineup is always going to have news and sports and comedies and drama and some nonfiction, some talent shows, some adventure shows. So I think it's really a broadcast network will always have a broad range and I feel my contribution was just showing that documentaries/reality programming could be as compelling as scripted programming and I think that's become true really."

An understatement if there ever was one. Catch Expedition Impossible when it premieres on Thursday, June 23 at 9 p.m. EST/8 p.m. Central on ABC.