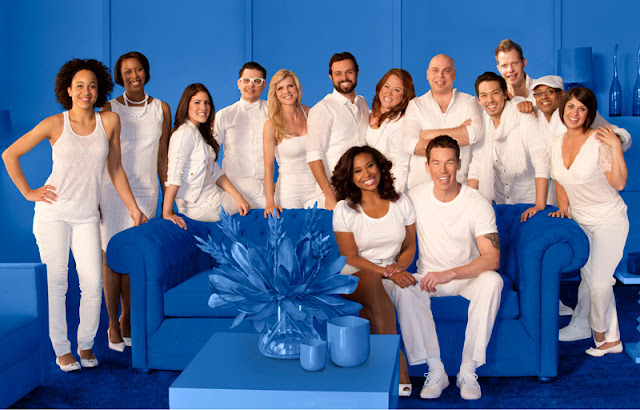 David Bromstad is HGTV's darling. After the nervous but extremely talented interior decorator won HGTV Design Star in 2006, Bromstad learned to be comfortable in front of the camera. And now he's everywhere. From hosting his own series Color Splash to co-hosting duties on the new show HGTV'd to appearances on specials like HGTV Dream Home Giveaway and Bang for Your Buck, Bromstad has put his stamp on the network. And now he's returning to his roots as the Tim Gunn-Style mentor on Design Star.

In a recent conference call interview he confessed, "I’ve been watching Design Star since I won and [am] just in awe of the talent that has come through there. And now to be a part of it is just, it feels right. It feels amazing. And I had so much fun. It’s a true honor."

His duties on the show are all about mentoring and giving the contestants advice. But he steers clear of giving them opinions about design. His role is to guide them through the ins and outs of being on-camera for the first time. He admitted, "You have to be professional, and even though there’s definitely people that you like and there’s people’s design styles that you get in the competition, I’m not there to infuse my opinion in their designs... I can give them certain pieces of advice, little pieces of nuggets, but they have to take those nuggets and run with it. I’m not there to say, 'Here’s what you need to do to win.' I’m there to just guide them to give better Design Star if they by chance happen to win."

David said that he wished he had a mentor when he was on the series, but did manage to muddle through, come out victorious and learn by trial and error how to be a host. In fact, he acknowledged that the most surprising thing to him was, "That I got comfortable in front of the camera. After doing Design Star and winning it, I was like, 'Now I have to do this on a daily basis, be in front of the camera, articulate, talk about things.' I was honestly really scared, and even a few short months after I got into Color Splash, I was like, 'Wow, we’re not in a competitive setting any more. I don’t have to do it in one or two takes or three takes, I can do it in 50 takes if I want.' And the ease of being a host, it’s been a lot easier than I thought it was. I think that’s probably the most surprising [thing] because [at first], I was like, 'I’m in trouble.'" Now he can share that experience with the competitors on season six of Design Star.

And he also continues to host Color Splash, now well into it's ninth season. And like its host, the show has changed throughout the years. In addition to moving from San Francisco to Miami, the tone has shifted. David remarked, "I happen to really like the serious format of the show. I think my lightheartedness and easy going [nature] comes across just as good as it did before, but we have bigger designs now that we’re in Miami. We’re spending more money. We’re more invested. And so I don’t mind it being a little bit more on the serious side. But I have to make sure that we’re always keeping it fun, always keeping it light because then there’s design."

When asked about design tips David acknowledged his first go to item is paint. He commented, "It’s the easiest and the fastest and the cheapest way to transform your house for sure." And while color is his biggest tool, he is also a fan of the opposite trend. He revealed, "My house, honestly, is all white. And it’s very comfortable and it’s very cozy. And I’ve done a lot of homes that are all white with all white walls. You can still make it look sheik and still make it look amazing. Don’t let the white walls fool you."

But whenever he starts any job, before he decides on any colors he discusses everything with his client. "My inspiration is my homeowners. If it wasn’t for them, then I wouldn’t be inspired. I can walk into a room that looks terrible and needs to be redone, and I have a lot of opinions, but I need to be inspired by my homeowners and what they’re inspired by and the colors they want."

And despite his fondness for white, his show is called Color Splash and so he infuses every design with a variety of hues. He professed, "I love color. So I love when a homeowner comes to me with anything but blues and greens. I love blues and greens. They’re my favorite colors, but everyone wants blues and greens because when you design for couples, what are the two colors that go with boys and girls? Blues and greens."

He continued, "So, anytime someone’s like, 'I’ll do pink, I’ll do purple, I’ll do fuchsia, I’ll do yellow.' To me it’s great… I’m never in a color rut because if I’ve never used a color, I want to use it and use it in a really fun, interesting and unique way that hasn’t been done before." Still his favorite client is the one who says the magic words, "'Do whatever you want'… It’s on like Donkey Kong for the show… Fantastic."

For related stories check out:
An Interview with Sweat Equity's Amy Matthews
Enter to Win Your Dream Kitchen