Skyler Samuels Gets Tough on The Nine Lives of Chloe King 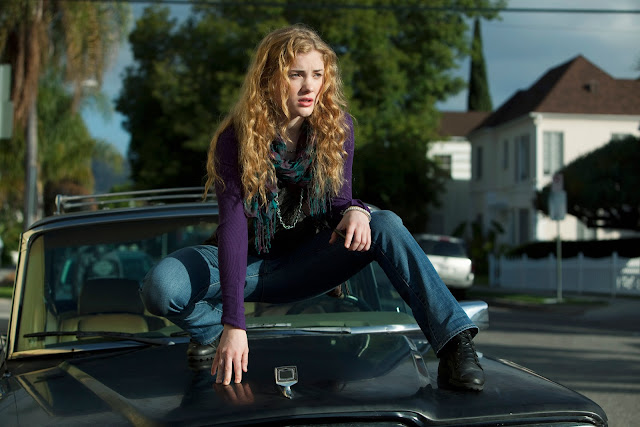 Photo by ABC Family/Adam Rose
You wouldn’t think it to look at her but the petite young actress Skyler Samuels is quite the badass. An admittedly bookish nerd in real life, Skyler has undergone some pretty intense training to take on the title role in the new ABC Family series The Nine Lives of Chloe King. During a recent set visit, she talked to us about her physical preparation for the role and what she’s truly like off screen.

Skyler admitted that prior to signing on to Chloe King she wasn’t very physically adept. “I couldn’t throw a punch, a kick. I had trouble running all before the pilot. And then everything got amped up when we came back. So at first it was like I was dying. There are so many training sessions where 400 jumps later on the jump rope I was like, ‘I can’t do it anymore.’ And [her trainer was] like, ‘Trust me. One day this is going to come in handy.’”

Needless to say the hard work has paid off. Skyler remarked, “Sure enough there are days I find myself hopping from building to building or kicking bad guys or punching villains in the face. And all of a sudden all those things have made sense and now I’m proud to say I’ve gone through Superhero Training 101 successfully.”

Some of her training has been focused on martial arts moves. Skyler admitted, “They’ve shown me like the basics of the basics. There was one episode where I ran off a pillar… I’m very impressed, but it’s really not that difficult. Meanwhile the guy who taught me how to do it did like four back flips and all this fancy stuff. And I’m like, ‘Yes okay, I’m not quite there yet but I’m working on it.’”

And thanks to all of her dedication to the craft, Skyler was able to achieve one big physical goal this season. She revealed, “There’s a couple of flips, one that I did myself in episode nine. Chloe is fighting a gang of knuckleheads, as I like to call them, and I did my first flip where I had someone flip me upside down and I kicked two guys in the face during the flip. So to do that on my own was a really big deal. So I’m very glad. That was my first staple of getting cool. I’m working on it. That was just me. It took a lot of trust and a lot of [deep inhale], ‘Oh my god. Oh my god. Oh my god.’ It’s like two seconds long but there’s a lot that goes into just getting that down. It took me almost all season but step by step.”

Of course Skyler’s just a regular teenage girl but her character has multiple supernatural powers. When asked which one she would choose to have in real life, she confessed, “I would probably steal the super speed because I could get more done in a day. I would just run everywhere and I would be super efficient. But the super hearing is pretty cool, too. I love the Chloe has the ability to eavesdrop and listen in and the super hearing power is probably one of the most important as the season goes on because she’s really used it to get herself out of trouble in really interesting ways.”

Skyler might not share Chloe’s superhuman skills but she said she has a lot in common with her TV persona. “We’re both very nerdy, quirky girls who get really nervous when we talk to cute boys. And we have great relationships with our best friends and our moms.”

Still Skyler said there is one other big difference between herself and her character. She acknowledged, “Chloe is fearless and takes risks in a way that I never would. Chloe thinks of things and does things that I would be like, ‘What? Why would she run on the edge of a building? That’s a horrible idea.’ But she’s like, ‘I’m in.’”

That just do it attitude does seem to be spilling over into Skyler’s personality a bit. “Whether it’s the action or the emotional stuff Chloe has challenged me as a person to do so much and face so many things that I found scary. That she’s really helped me branch out and grow up. And I can’t imagine becoming a young woman without Chloe King. She’s changed my life.”

See Skyler Samuels in action when The Nine Lives of Chloe King airs on Tuesdays at 9 p.m. EST/8 p.m. Central on ABC Family.