Courtney Rainville Talks About Her Time on The Biggest Loser 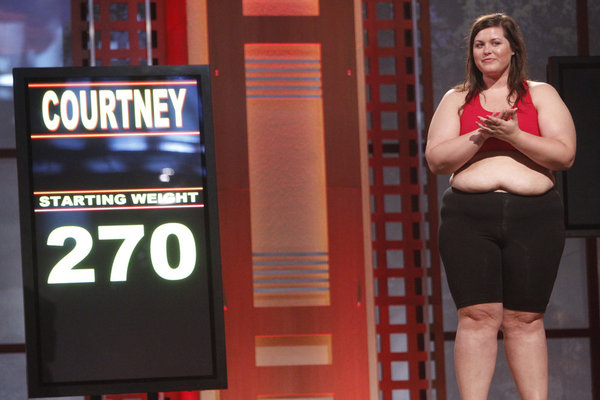 Last week on The Biggest Loser the Red Team made another difficult decision and sent home Courtney Rainville. But despite how close the "young guns" seemed to be, there appeared to be a few tears in the fabric of the under 20 players' bond. In a recent conference call interview Courtney talked about feeling separated from her team and not being surprised she was eliminated.

The youngest group on the ranch held strong for the first few weeks, although they could not beat the middle aged Black Team. The competitors wearing the red shirts talked about being close and spent their free time hot-tubbing and hanging together.

But Courtney recalled there was a slightly different story going on. She noted, "After Patrick got eliminated I got weak. I knew I needed to start looking out for myself because, Patrick, Ramone and Vinny were very close to each other and Jessica and I were close as well. Jessica tended to have a closer bond with the boys than what I did and I think that that just stems from who I was before I went on the ranch."

She admitted, "I had a hard time making friendships with men because I was so shy and insecure. And when Patrick was [sent home] I knew that I would be a target just because the boys were too close and the health issues that they brought up a lot and I wasn't to the extreme of both Vinny and Ramone."

When the Red Team lost the weigh, in Jessica received immunity for dropping the most pounds. The vote came down to Vinny, Ramone and Courtney. The only woman on the chopping block knew she had a target on her back. "I think it was more the fact that that week there was a little bit of tension between the Red Team merely for the fact [that] I branched out on my own and didn't always follow the group. If I wanted to get up earlier then I went earlier to the gym as opposed to wait to go to together as a team just to get my burn in."

In the end it came down to one thing. "Honestly, the three of them had a closer bond unfortunately than I did with them. I still thought I was extremely close to them and it was never about myself. It was still a team. But I think that they just bonded, a little bit closer than what I did with them, which actually was unusual for me because I always am extremely close to everyone I meet."

So when Courtney received three of the four votes, she appeared a little bit peeved. "I guess I would say that I was a little bit angry and upset because I didn't feel like it was my time to go home yet and I didn't want to go. My way of going into the show was instead of having game play I always wanted to go in with I'm going to vote for whoever has [the] least percentage of weight loss and to me that was Vinny. And that's why I wanted to vote that way."

Her teammates pleaded their cases that they had more serious health problems than Courtney and so they needed to stay on the ranch. But she rebutted, "It's hard to go the medical standard just because everyone has medical issues and they're there for different reasons, whether it's not just health but also emotional, something bad happened in their life... And it offended me a little bit when [Vinny] was talking... It almost made it sound like I was in the game just for myself opposed to as a team, which I never was."

Still what her teammates saw as her pulling away and the reason they voted her off, Courtney saw in a positive light. She noted, "Maybe it seemed like I was separating myself from the group, but all in all I was really just focusing on myself for the first time and I felt really good that week about it."

In fact Courtney admitted that she was just finally dealing with her emotional baggage thanks to trainer Dolvett Quince. "Dolvett said that I would be going home if I didn't change my attitude and my emotional struggle and internal struggle was definitely my hardest. It was my confidence. But each week I was at the ranch, especially the last week I was there, it was probably the best I ever felt. And when people would bring up that I still had lots of confidence issues it was almost as though they didn't see my progression that I was making, which was a little frustrating too."

Now that she is home she has worked even harder on building that confidence. She proclaimed, "I have an amazing family and friends. I started working out at Cross Fit Forever Strong, which is in Chandler, Arizona, and it's like a community. It's a family right there. It's people that are cheering you on constantly and my trainer, Jason Stock, really focused on me and he wanted to help me and help me do it the right way… I think that's really changed my perspective on life and it's giving me more confidence than I ever expected. I think that it's because at Cross Fit Forever Strong that I have gained confidence in myself while being home and I can walk into a gym and like hold my head up proudly."