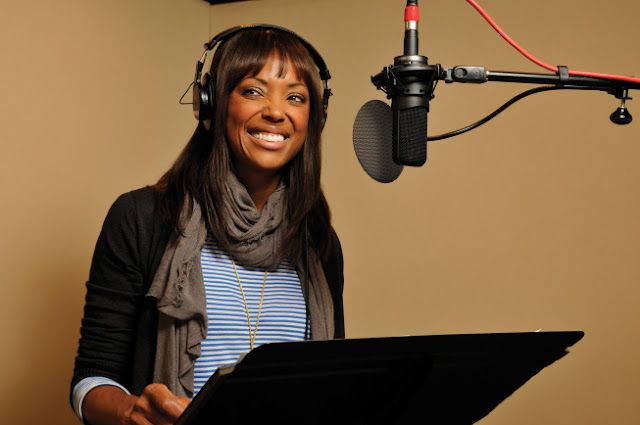 Aisha Tyler has a lot of jobs these days. She's a co-host of the CBS daytime show The Talk. She's the star of the Canadian drama XIII: The Series. She has a weekly podcast called Girl on Guy with Aisha Tyler. And she travels the country performing stand-up whenever she gets a chance. But perhaps her most notable role these days is voicing the big-handed, mini-skirted Agent Lana Kane on the FX animated series Archer. The show will wrap up season three on March 22. But have no fear Archer fans, they have been picked up for season four. In a recent conference call interview Aisha talked about playing Lana and what she hopes happens for her character.

Aisha said she wanted the part of Lana as soon as read the first script. She recalled, "I read about a third of it, saw that there were curse words in it and said, 'Yes.' It was also quite funny, but I just couldn’t believe what a great combination of smart and funny it was. And I remember thinking, 'This will never make it on the air — too smart and too funny.' But thank god for FX."

The actress discussed what drew her to the character of Lana and how they differ from each other. "I wish I was more like her. I think she’s awesome. We’re definitely both tall and amply proportioned. My hands are neither crooked bass nor Truckasaurus. Thank you. They are lovely, delicate feminine hands. Maybe the nails are a little stubby and gnawed on but I definitely do not have man hands."


She continued, "I love Lana. I think she’s smart. I think she’s effective. I think she’s funny. She probably could wear a pair of pants every once in a while. It might be good, might be good for the constitution for Lana to cover up a little bit. But other than that, I wish I were more like her because she’s definitely bad. I’d love to hang out of a moving van firing TEC-9s. I think that would be great. That’d be a good afternoon."

Aisha also admitted that she would like to adopt some of Lana's traits in her real life. "I have not filled my closet with turtleneck mini dresses. I can tell you that. The one thing that I love is she can be both no nonsense and also self-deprecating. I think that’s something that’s really wonderful about her. She takes her work seriously but she doesn’t take herself too seriously. I hope that I’ve incorporated that into my real life. Lana lives the life that I would love to lead. She’s an international woman of mystery and doesn’t suffer fools lightly. I suffer fools constantly. I’m a fool sufferer… I’m the kindest, most supportive friend ever, probably to my own detriment, but I hope that I am toughening up a little bit. Hopefully I’ll get a little bit more of Lana’s Kevlar exterior. I’m kind of a softie."

She added, "She also runs around firing machine guns in her underwear. I mean come on, who doesn’t want to do that? Every girl wants to do that. Every guy wants to watch a girl do that. Even my gay friends are like, 'I would go straight for like three or four minutes just to hang out with Lana a little bit in her Fiocchi knockoffs.'”

Some have compared Lana to a modern day Jessica Rabbit from Who Framed Roger Rabbit. But while Aisha saw the slight similarity, she disagreed, "She still was a victim and Lana’s definitely not a victim. Lana is first in the door. She’s primary through the door in every mission and she will roll up her sleeves and do whatever it takes to get the job done. She’s definitely not a wuss and I love that about her… If you’re bleeding from a neck wound and you’re about to die, Lana will like repair your neck wound with like a paperclip and a Band-Aid and fight everybody off with her other hand while in her underwear. She’s the girl I’d want on my team."

The actress also has some big thoughts about where she thinks Lana should go in the upcoming season. She stated, "Especially after Archer got sick and they went through their rampage together, Lana has a lot of sympathy for Archer that she didn’t have before… She’s softened quite a bit towards him. Sometimes she feels affection for him and sometimes she thinks he’s pathetic. But she has a new found compassion for Archer and an understanding of who he is and why he is the way he is that she might not have had before when she was just furious with him. I keep lobbying Adam for some kind of massive sexageddon between the two of them. And I’m hoping that it’ll happen because I think it would be great."

She explained that she would like to see even more depth added to her character, "It would add a nice layer to Lana’s story if she started to doubt herself. She seems to always really know herself and really know how she is and what she wants. She’s always very definitive about, 'Archer’s on my last nerve and I’m here to get the job done and get out of my face.' But I would really love to see her have some kind of a breakdown because she’s always perfect. It would be fun to see her be conflicted and a mess. It would also be great to see Archer be conflicted and a mess or more conflicted and more of a mess than he’s been so far after losing his wife to the robot murder, Russian overlord, Bionic Barry… So I would love to see them get together. I would like to see some relationship drama happen at ISIS and just turn into some kind of a big nuclear bomb, not a literal nuclear bomb but an emotional nuclear bomb. Let’s ruffle some feathers up in this bisnitch."

Fans will have to wait until season four to see if Aisha gets her wish, but in the meantime tune into the rest of season three of Archer on Thursday nights at 10 p.m. EST/9 p.m. Central on FX.