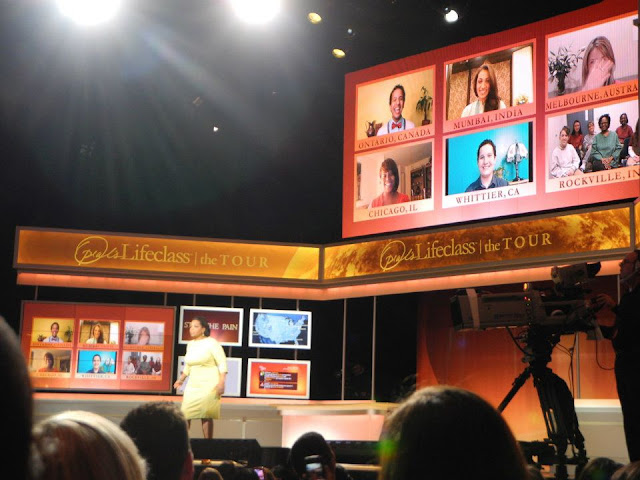 On the season two premiere of Oprah's Lifeclass, fans called in on Skype from around the world and while many had very touching stories, none of them grabbed our hearts as much as Prasanna Ranganathan. The 31-year-old lawyer from Ottowa, Canada, wore a red bowtie, a turquoise shirt and a smile that lit up the entire 3100-seat Peabody Opera House.

Prasanna's moment in Oprah's light occurred right after a very intense segment with a recovering addict named Steve, and it seemed like we could all use some comic relief. Enter Prasanna. As soon as he appeared, we began Tweeting to find out how we could get in touch with him. Literally seconds later, we had his Twitter handle and had reached out to him. His Tweets were also kind and gracious and so we knew we had to talk to him ourselves.

We spoke with him last Friday, just 30 minutes before he officially became unemployed. His contract with the Justice Department in Canada had not been renewed due to budget cuts. He told us this experience could not have come at a better time. "It was especially exciting to be part of Lifeclass dealing with pain and transitions and stuff this last week of work, so it was kind of life changing." He said that he did not view his unemployment as a problem but rather as an opportunity to pursue his passions. "This as really a window opening for me to follow my dreams."

He related why Lifeclass meant so much to him, "I watched every episode of Lifeclass last season with my mom and dad and took extensive notes. And then created a journal that I ended up giving to my mom for Christmas. One of the things that really stood out for me was the episode about everybody has a calling. Because it talked about how our callings are not always aligned with our profession and as Oprah says, it's our life’s work to go about finding and honoring our calling."

It resonated so much that he wrote in to the show to tell them. And that email resulted in a very exciting call for Prasanna. Within an hour of sending it he heard from a Harpo producer who wanted to know more details about his goals. A few weeks later they asked him to do a promo video. He proudly stated, "I appear in the 30 second commercial that's running on OWN." After the video another producer called and invited him to take part in the live taping of Oprah's Lifeclass: the Tour in St. Louis via Skype.


He explained how he felt when he got the news, "Oprah had these episodes last season called 'Joy Rising,' so I could say that the joy was probably rising through each successive phone call or email."

On the episode, Prasanna asked a very insightful question about whether Iyanla Vanzant and Oprah thought that feelings of inadequacy were the source of our pain. And while we appreciated his thoughtful inquiry, what came next was what clinched our love for Prasanna. During the next segment, slowly creeping into the shot was his ice cream scoop. While on the call, he remembered an episode last season where Iyanla made a reference to the tool saying each lesson was a scoop of nourishment and excitement and a way to feel differently.

He recalled, "I initially held it out very slightly." But then he said one of the producers came on Skype and asked him to wave it around and make sure it was visible on screen. It caught Oprah's attention and the whole world was watching Prasanna scooping up the joy. "I meant to do it totally respectfully and I was just so excited and filled with so many life lessons I couldn’t contain it."

We couldn’t get off the phone without asking him our standard Passionistas question, "What's your passion?" He replied, "My passion is two-fold. My first passion would be movies and television and pop culture... I always think about movies and television and stories in general as a way for us to connect to the human spirit. So how are the different ways that people express themselves and what does that teach us, not only about the stories of others around the world but what pockets of light does it shine on ourselves? What can we learn about ourselves through the stories of others?"

We also wanted to know, since he's such a fan of pop culture, if you could embody one pop culture icon for one day who would he choose. He could not settle on one, "I would like to wear one shoe from two people."

Not surprisingly his first choice was Oprah, "Although I would have to wear flats, because she wears some very high heels… She's someone who could have used her power to accumulate things for herself but has used her power to shed light on issues that otherwise wouldn’t have had a voice and used her life in service to others. So that would be someone that I'd like to emulate and walk in their shoes for a day to see what it's like to be an inspiration to so many people but also to understand the tremendous responsibility that she's probably under and the tremendous pressure she's under on a daily basis being a community and societal leader."

Although we assumed that would be his first choice, his second icon surprised us a bit. "The other person is Meryl Streep, who I've adored since I was a child... For me it’s her chameleon-like ability to imbue the characters that she plays. And whether it's Sophie in Sophie's Choice or the Iron Lady, Margaret Thatcher, it's how can you find pockets of light in humanity and people and shine a light on notions of people that you wouldn’t have otherwise seen? We see depictions of people in the media but she always seems to strike at a core trait of someone that is something that's undiscovered. And I love that because it means that she's paying attention and that she cares and that she's empathetic. So it would be fascinating to be in her shoes for a day to see how she completely disappears into the roles of others."

Out time with Prasanna came to an end, but we made him promise to keep in touch and let us know where he lands next. He concluded, "I'm very excited, as Oprah says, for my next chapter, whatever that is."

Watch Oprah's Lifeclass: the Tour on Monday nights at 8 p.m. EST/7 p.m. Central on OWN. Follow the show online at Oprah.com and see the coursework that corresponds to each episode's theme. Join the Lifeclass conversation online on Twitter @OprahsLifeclass and using #lifeclass.