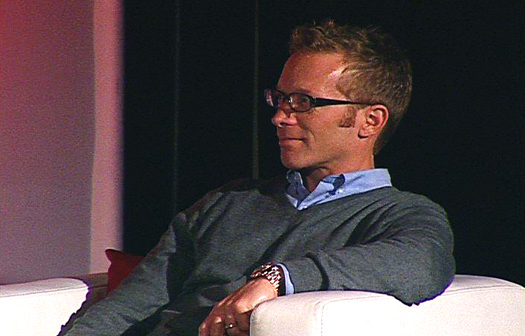 Photo courtesy of the Academy of TV Arts and Sciences

We recently had the opportunity to attend the TV Summit, which was hosted by The Academy of Television Arts and Sciences Foundation and Variety magazine. While the whole day was filled with informative and thought-provoking discussions about the current state, as well as the future, of television, one panel was truly inspiring. The Power of TV — Making Content that Matters seminar featured network executives and TV producers creating television with a message. And we chose the words of one person from the panel, The Biggest Loser creator J.D. Roth, as our most inspiring moment of the week.

J.D. spoke about how difficult it was to get The Biggest Loser on the air originally because people thought it was going to be mean-spirited. But he battled hard to get the series seen saying, "If there's an idea that you're passionate about, you're the best advocate for it."

He continued, "Transformation is important to me, and so I was fighting to get transformation on television. But that wasn't the norm back then. And certainly putting overweight people on television and wanting to change their lives wasn't a popular choice... and I kept trying to explain that we were going to turn these people into Olympic heroes."

The producer reflected that back then, "Everyone knew someone at their dinner table that needed help. And you would always go to the smoker and say, 'Man, you shouldn't smoke that much.' Then next you go to the drinker and say, 'Maybe one less drink?' But you never go to the overweight person and say, 'Man, you need to move more and eat less.' No one would ever do that, for obvious risks."

But after a few seasons people understand the influence The Biggest Loser has had. J.D. stated, "The power of TV [is] when you think about the conversation and how it changed at the dinner table in five years. Where my kids started noticing, and their friends started noticing, the whole childhood obesity thing and not making fun of those kids but realizing maybe there's something there that they could help."


While he acknowledged he is just making reality TV, he realized the power of the medium. "We have a direct line right into the living rooms and [we have to be] socially responsible for the message that we're sending. There's two types of shows you can do. You can do the ones that feel exploitive and that are just docu-style and you can do a show that actually changes somebody's life. And those are the ones that I'm passionate about. And I watch the other ones, too, but those are the ones that get me out of bed."

When he created The Biggest Loser he knew there were unhappy people looking for answers. "Everybody knows somebody who wants to change their life... So to me that's the best television is to show someone getting a piece of their life back that they lost... To be able to be part of something that's authentic to me is the greatest reward for what I do."

He recalled an interview the night before the very first episode of The Biggest Loser aired. He was invited on to Entertainment Tonight to defend the show against the Overweight Women's Association of America. The two women, who had never seen a second of footage from the show, thought it was exploitive and contended that some overweight people are happy. J.D. replied by saying, "Well, I'm looking for the ones that are unhappy. And I think there's millions of them."

He added, "That was really what we went after. It was a show to reach after the human spirit. What's the Olympics without the stories before the actual event? And that's what this show is going to be. This was the story behind the event."

In addition to The Biggest Loser, J.D. has gone on to create Extreme Makeover: Weight Loss Edition, I Used To Be Fat and The Revolution. He stated, "We're doing 300 hours of television in this space this year, just in that area. So I think people do want to change their lives or we wouldn't be doing that many hours."

J.D. recalled a moment that helped him realize the scope of what he was doing. "A couple years ago I overheard my kids talking to someone asking, 'What does your dad do?' And my older son said, 'My dad helps people.' And so I know there are so many bigger things than that, that we all do. But in the end that it's not, 'My dad produced a TV show' or 'My dad's a producer.' It was, 'My dad helps people.' And for me that put it right in my mind that kids will never listen to a word you say, but they will watch everything you do."

He continued, "It really stuck with me. That was the most powerful impact on an audience that I could have made. And so in the end I realized that was what I was supposed to do. I'm supposed to help people. And whether that's through television or helping a woman get to her car, whatever it is I think that's why we're all here. That's what we should all be doing. We're just lucky enough to be able to do it to a bigger audience."

Watch the finale of The Biggest Loser Tuesday night at 8 p.m. EST/7 p.m. Central on NBC.