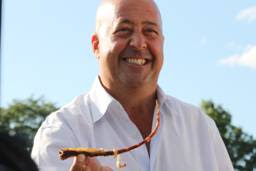 Season 7 of Bizarre Foods kicks off with a 100th episode celebration in Las Vegas, including an inside peak at Muhammad Ali’s 70th birthday bash. But as lavish as that sounds, Andrew says that the remainder of the episodes will not disappoint. He revealed, “The rest of the season has got some of my favorite episodes… We go to Austin, Texas. We do Florida and Miami — two separate Florida [shows] — more strange stuff going on in Miami. We just couldn’t cover it in one and decided to head into the center lands of the state and go through central Florida and make another episode.”

But the highlight of the upcoming season just might be the Los Angeles episode. Andrew described it as “one of the most unusual episodes we’ve ever filmed, which is certainly in my all time top five… In that episode, we managed to create a pop-up restaurant — a one night only bizarre foods menu — and I used that mechanism to explore Los Angeles. [If] I’m going to compete as a lonely restaurateur in that city, I’d better know what the diners like and what the chefs are cooking.”

In order to pull of the fete, Andrew called on some high-powered friends in the foodie domain. He gave a sneak peak, saying, “So we had a chance to hang out with the guys from Animal, Jonny Shook and Vinny Dotolo Shook, and Michael Voltaggio from Ink and Lee Hefter from Spago and Ludo Lefebvre from Ludo Bites — and then create our pop-up restaurant, which was absolutely a blast. It’s great to get out and cook for people again. I missed it, and still do.”

But of course Bizarre Foods is more about eating than cooking for Andrew. The chef-turned-TV-personality acknowledged that he’s part of an elite culinary club, “Some of the craziest food in the world is so arcane or so seldom seen that it’s almost like a cult of people who have eaten them. Real casu marzu is now illegal in Sardinia. Ortolan are illegal in France. Foie gras is now illegal in California in a couple more days.”

Still there are some foods that the man who’s tasted everything from a still beating frog’s heart to almost every type of testicle one could imagine, doesn’t like. He confessed, “I take a tremendous amount of enjoyment from a huge variety of foods, but [the popular Southeast Asian fruit] durian tastes like rotten onions and smells like feet and probably, most importantly, is that you have to walk past ripe mango scenes to get at the durian, in any tropical Asian market because durians come into the same season as mango scenes.”

As Andrew was quick to point out, an aversion to certain forms of nuts isn’t all that unusual in other parts of the world. He explained, “In Argentina they don’t eat peanut butter. It’s repulsive to them. Kids won’t even try it.”

Still he said that anyone looking to step out of their comfort zone on an international trip should absolutely sample one of the world’s biggest culinary secrets. Andrew suggested, “I recommend anybody going into any department store in any Scandinavian country, buy themselves a tin of something called Surstromming, which is fermented canned fish. That’s one of the all-time most heinous foods in the world. Easy to get, not fun to eat it. It’s pretty foul.”

And that sums up Andrew Zimmern’s day job. Watch him find unusual delicacies in our own backyard when Bizarre Foods America debuts on Monday, July 9 at 9 p.m. EST/8 p.m. Central on the Travel Channel.