Bachelor Pad’s David Mallet Has His Strategy Laid Out 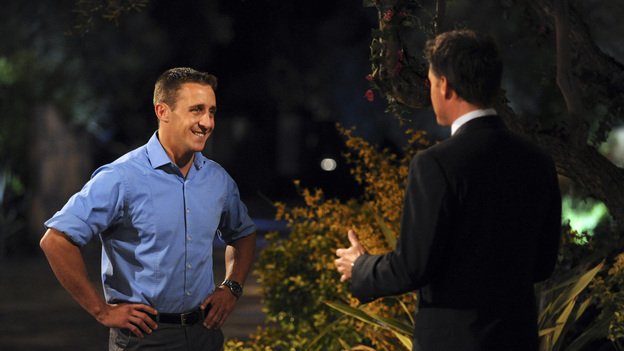 On Season 3 of Bachelor Pad, the producers introduced quite a brilliant twist, adding super fans into the mix. Had we known when the audition notice went out that they might accept sisters as a team, we would have been all over it. Well, in theory anyway, we’re not the bikini and hot tub kind of girls, really. But we digress.

Along with the 15 Bachelor/Bachelorette alumni, five (six if you count the twins individually, although they play as a team) super fans were thrown into the mix. Of course, everyone knew from the first second that these poor, unsuspecting fans had huge targets on their backs and the vets would pick them off two-by-two. But fan David Mallet had other plans. In a recent conference call interview he revealed his strategic moves for the game.

Size Up the Competition
As soon as Mallet arrived at the house he counted the number of fans versus the number of veterans and knew they were immediately in trouble. Five against 15 certainly was not comforting odds. Even before arriving at the show, he wondered what the producers were going to do to give the fans some kind of a chance to stay in the house and not be voted out in the first two weeks of competition. He got what he was hoping for when he and the twins won the first challenge, gaining immunity and guaranteeing at least a few more days in the house.

Be Honest to Gain Their Trust
While every in the house was scrambling around trying to figure out who to vote for, David willfully told Eric Rose he and all the fans were dropping her picture on the ballot box. He contended that she already knew his plan but was trying to see what he would do when she confronted him. He recalled, “When she came over and asked me that question, she had already known what my plan was, and I wasn’t going to lie to her face. So the only card I really thought to play is to be honest. I know I’m still guaranteed a spot for next week, so at least she may respect the fact that I was honest with her instead of trying to go behind her back and her really hating me for it.”

Announce the Plan to Flush out Your Enemy’s Supporters
And despite how it came across on TV, David swears he had another strategy in mind when he told Erica his plans. He new it was risky to make enemies with her, but he wanted to gauge the reaction of the other players. He stated, “I was absolutely putting myself in a risky position, but we had two guy newbies on the show and three girls. Even though we had won the challenge, and me and the twins were safe and we have one vote against Erica, that means nothing because we still need some veterans to come over and vote with us for any chance to be able to get a veteran out of the house.”

He continued, “I was hoping to look at everyone’s reaction. The people that were upset about it, I would be able to figure out were with Erica. The people that weren’t that upset about it, I would have a chance to work on and try to get votes on our side. Really, the main point of me telling my vote out loud to Erica was her running to the house. Everyone that came to me to try to change my mind I knew was with Erica, and the people that didn’t, I could go for them and try to persuade them to go with us.”


Kill Your Enemy with Kindness
Well David’s plan did not work, mostly because one of the fans was mad at him for announcing the strategy and so voted for someone else besides Erica. So now David is stuck in the house with his mortal enemy and someone in the game that you really don’t want on your bad side. Erica promised to make his life in the house hell if he voted for her. While David could not reveal what she did next, he divulged, “I can tell you that she does hold a grudge, and I’ve known that from watching her. All my hope was after hearing that from her is to just kill her with kindness and keep bringing up the fact that, ‘Erica, I’m a fan. I’m here on the show. I’m even more of a fan of Bachelor Pad than The Bachelor and The Bachelorette.’”

Watch for Missteps
But Erica’s not his only problem. He has eight other teams vying for the $250,000 prize. And so he keeps his eyes opened. He explained, “There’s always somebody making a mistake, especially the veterans. They’re going to upset somebody. They’re going to make a bad move. They’re going to rub someone the wrong way, and all you need is one excuse to make some people mad, and they can vote you out of the house. So I tried to play off that a little bit further on… I try to stir up a little drama. I know the backstories between people. If I see something in somebody else, doesn’t know what’s going on, I try to stir it up without making it obvious it’s me bringing up all these conflicts.”

Stay Away from the Other Guy’s Girl
From watching the two previous seasons of Bachelor Pad David knows that the easiest way to make enemies is to hook up with another guy’s girl. And so when he arrived at the house with a crush on Lindzi Cox, he was disappointed to hear Tony Pieper had his eyes set on her, too. David remarked, “The second I heard that, I wasn’t going to even try to step on any toes the first night… You could hook up with a girl, and one of the other girls in the house might be interested in you, and now you’ve lost that little up that you had on everyone. And also, a guy might like a girl that you show interest in, and he might not be happy with you. He might want you out of the house.”

Take Michael Stagliano to the Finish Line
Who knows David’s fate. They vets very well may pick off the fans one-by-one, but David has a strategy for the end game, if he gets that far. He said, “It’s smart to try to take [Season 2 winner] Michael [Stagliano] to the final because he has already won, and no matter how great of a guy he is, no one is going to pick him twice to win unless they really hate the other team in the final. So as long as you are a good guy and you play a good game, if you can make it to the final and bring Michael as the other guy into the final with you, you have a great chance of winning the money in the end.”

See how far David gets on Bachelor Pad on Monday nights at 8 p.m. EST/7 p.m. Central on ABC.