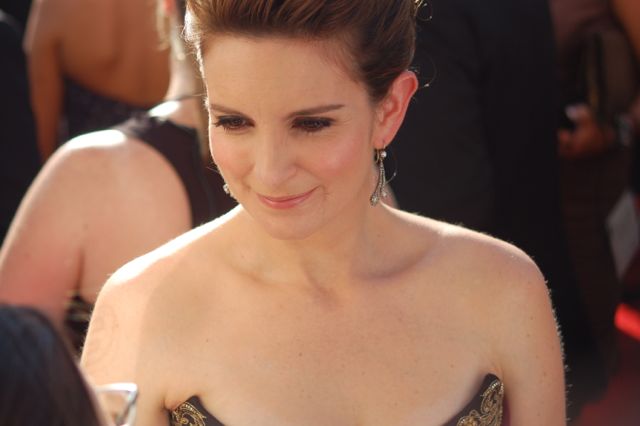 Our day on the Emmy Red Carpet, doing interviews on behalf of the Television Academy Foundation's Archive of American Television, was more studded than ever this year. We credit our position, right next to the Extra platform. It provided us, not only with much needed shade in the 95º Los Angeles heat, but also with access to the stars waiting in line to talk to the Mario Lopez. Here are a few of the highlights. Stay tuned to this page and our Facebook and Twitter profile for photos and videos to come.

Tina Fey Joins The White Shadow
The red carpet was buzzing and we were watching for the next star who we could grab and talk to. When right in front of us a shadow appeared, a White Shadow to be exact. Ken Howard, a current guest star on 30 Rock approached and we chatted with him for a moment, telling him we were big fans of his '70s show. And as if that weren't thrilling enough, he called over his good friend and co-star, Ms. Tina Fey — definitely our biggest get of the day. They talked for a second about life on the 30 Rock set and then the Shadow disappeared leaving us alone with Tina. And despite the numerous comparisons of Passionista Nancy's looks to Ms. Fey's (personally we don't see it) we caught on camera the ultimate proof that we are, indeed, two separate people. 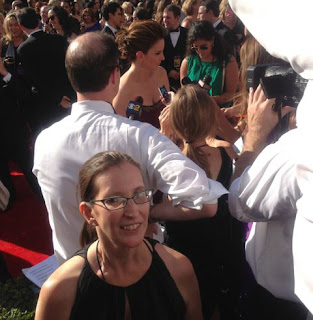 Dick Cavett Lost His Emmy
As huge fans of the golden age of TV, one of our most exciting moments of the day took place when we met talk show host Dick Cavett. After getting over the fear of interviewing one of the best interviewers ever, we had a nice time with Dick and his wife. He regaled us with a story of losing an Emmy. No, he did not get a nod and lose to another performer. He won the statue, but accidentally left it behind at a photo shoot. He looked directly in the camera and pleaded for its safe return.

Jon Cryer Cites Bobby Brady as an Influence
When Jon Cryer came over to talk to the press in our area, he displayed the faces he had been practicing for the day — his "I'm pretending to be happy for the winner face" and his "Oh, my god, I actually won face." Much to his surprise he used the second look later in the ceremony when he took home the award for Outstanding Lead Actor in a Comedy Series for his work on Two and a Half Men. Perhaps he should share the honor with "the actor who played Bobby on The Brady Bunch" who he cited as an acting influence in our interview with him. 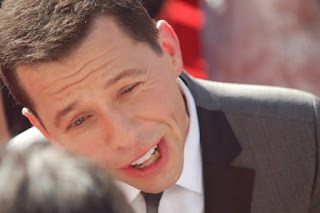 A Downton Abbey Sandwich
We admit, we came late to the Downton Abbey party. At last year's Emmys we heard raves about the first season which took home the award for Best Miniseries in 2011. Not big fans of the period piece as a genre, we reluctantly sat down to watch the story of the British aristocrats. We were sucked in by the end of the first episode and now we're hooked. So we were thrilled to find ourselves in a Downton Abbey sandwich on Sunday when Joanne Froggatt (who plays Anna Smith) was being interviewed by Mario Lopez on our left and Michelle Dockery (Lady Mary Crawley) was speaking to the press on our right. We also spoke with the show's creator Julian Fellowes and got a glimpse of the men of the Abbey at the ball after the show. 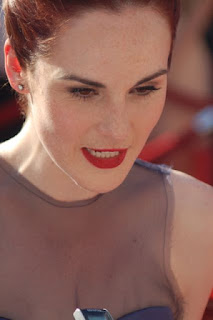 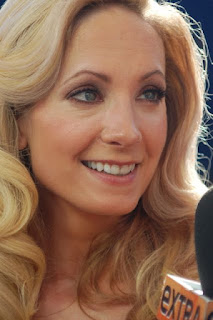 Not-So-Good Luck Charms
We had a great chat with Jeff Schaffer, producer from Curb You Enthusiasm. He told us he loves coming to the Emmys and losing to Modern Family. We answered back that we thought this was the year Curb would knock the Pritchett-Dunphy family off their Emmy pedestal. But Jeff did not agree. As he walked away we wished him luck and asked him to think of us when Curb took the statue. He promised he would and called us his good luck charms. Let this be a lesson to you that we are neither very good predictors nor very lucky. Modern Family took the title of Outstanding Comedy Series for the third year in a row.

What's Kenley Doing in That Dress?
On Season 10 of Project Runway, the current contestants designed a red carpet look for a past player. Ven Budhi won the challenge, creating a navy blue cocktail dress for Season 5 finalist Kenley Collins. They announced she would be wearing the creation to the Emmys and so we had our eyes peeled watching for her. And then suddenly, there she was a vision in — floral. She was indeed accompanied by Ven and wearing an original Budhi design, but it was not the dress he made for her on the show. She told us she wanted a print, so he came up with a new design. 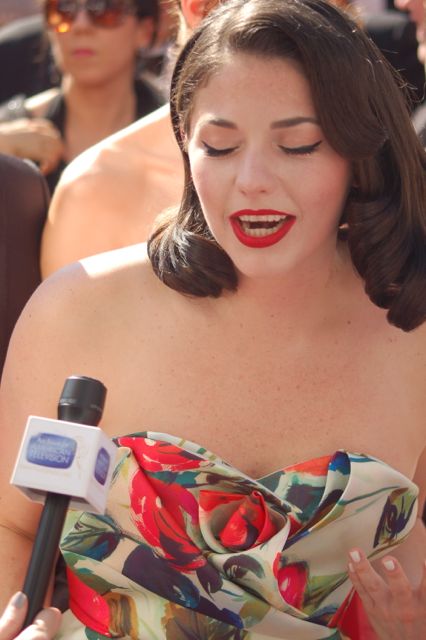 Reality Show Near Misses
Each year the red carpet is dotted with more and more reality show personalities. We were thrilled this year to talk to Tom Colicchio and Gail Simmons from Top Chef, Bertram Van Munster and Elise Doganieri co-creators of The Amazing Race and Bruno Tonioli from Dancing with the Stars. But we also had a few near misses. First Phil Keoghan from The Amazing Race was wisked off by his publicist after she told us we'd be his next stop. Then Ms. Kathy Griffin walked over to our section of the carpet saying, "Who wants to talk to me?" We looked right at her and as she approached, a publicist swooped in with another interviewee… leaving Kathy to talk to KCAL. And, in perhaps the most disappointing moment of the day, we saw our hero, Bravo's Andy Cohen, dart past all press on his way down the carpet and into the theater. We did get a great shot of the back of his head as he got away. 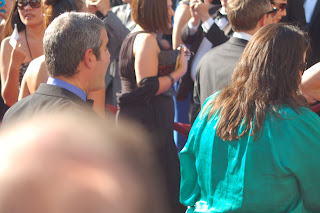 The Late Arrival
This is our third year covering the Emmys so by now we know that even though the carpet is closed and the show has just about to begin inside, we need to hang back. Inevitably after the buzz has died down, you hear a roar from the bleachers as the big name late arrival star, who is far too important to walk the carpet with the plain folk, quickly scurries past the remaining press and into the Nokia. This year, as predicted, we heard the screams and waited to see who would turn the corner. Who did we not see yet? Who felt the need to sneak in late? None other than Nicole Kidman, nominee for Outstanding Lead Actress in a Miniseries, and her American Idol hubby Keith Urban. Well worth the wait. 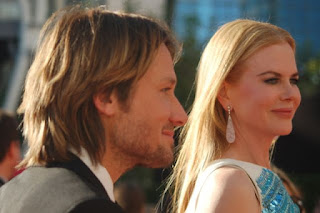 Our Picks for the 2012 Creatve Arts Emmys