Pip from Season 2 of The Voice Has a New Single 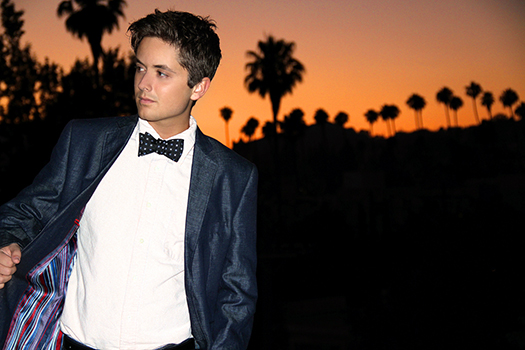 Now that Season 3 of The Voice is in full swing, we caught up with one of our favorite singers from Season 2 — Pip. Phillip Andrew Arnold, known as Pip since his then-two-year-old nephew couldn't pronounce his name, captured our hearts with his bow ties, suspenders and booming pipes. Sadly he didn't make it past the quarter-finals, but the experience has helped him define himself as an artist and has kickstarted his career. In a recent exclusive interview he talked about being on the show, finding his musical style and his new single, "Who Cares."

Pip has been performing since a young age, but at the time The Voice auditions came around, he was going to school to become a pharmacist. He won a chance to move to the front of the line at an open call in Atlanta and earned a spot in the Blind Auditions. All four judges turned around when he sang "House of the Rising Sun," but Pip chose Adam Levine as his coach.

He talked about what was going through his head during the audition, "I was ready for no one to turn around and had my rejection speech ready… when they each turned around it got more and more real. I got more nervous the more they turned around. I finally went with Adam because, one, he turned around first, but mostly because he sold himself. I felt like he wanted me to be an artist and see where he could take me."

He went on to explain why he got more nervous as each judge pushed their button, "When they turn around you're like, 'Oh my gosh, that's Christina Aguilera. That's Blake Shelton. That's Cee Lo.' And it's such a strange thing because it makes it all real. It also makes you realize that you're going forward. When some one turns around, it's on. You're on to the next round."

In that next round he was on Team Adam and talked about what he took away from being coached by the Maroon 5 singer. "The biggest lesson I learned from working with Adam was probably just to stick true to yourself… He always said there's a time when you're with the people who know what their talking about to listen to them and there's a time to make sure you stand up to what you know you are as an artist... He really thought we should stand up for ourselves individually and make ourselves an individual artist and not be swayed by what other people [wanted], even if it seems like something that might be [good]. But if it's something that really isn't true to yourself as an artist you shouldn't do it."


Pip also told us what he personally discovered from his Voice journey, "The most important thing I learned about myself is that I really needed to come up with a definition. On the show I did this vast array of different genres and different songs and in the end that was my problem because no one really knew who I was. I had the bow tie, I had the suspenders and I had the colors. But musically I was someone who doing a bunch of different things. So throughout the process of the show I had to figure exactly who I was as an artist. That was the thrilling thing and I have to thank the show because it helped me figure that out."

His time on the show did not lead to a record deal or a spot on a Maroon 5 tour but it did get the singer something almost as valuable — fans. "I went from literally being no one, a kid from Marietta, Georgia, who was in pharmacy school, now to someone who actually has a decent sized fan base that I can start a career with. And I think that something that these shows give people, that is the advantage and the edge, is instead of going out and playing shows when you have no fans you get have this small but sizable fan base that can help you, and support you and buy your music and buy merchandise."

Pip's current style is a mix of '70s funk and pop and is quite different from anything on the radio. He has a new single, his first ever, called "Who Cares" and hopes to release an EP by November. And all those fans who discovered him on The Voice can follow the progress of the EP on his website and weekly doc series called  "Black Tie Optional." He hopes the EP,  "No Formalities," and his fans' support will lead to something bigger. "This record is mostly for me to show myself to labels and try and get signed because there is only so much you an do as an independent artist. And with the fan base that the show got me there's really a lot of potential to do something great and big and amazing… I'm in this for the long run. I really think I can do something that's bigger than Pip from The Voice and so that's that I'm working on."

But Pip is not just another pretty voice. He also has a caring heart. After his best friend's dad lost a battle with cancer, Pip started Youth in Mission in his honor. Pip explains, "He was a huge advocate of mission work and especially kids and youth and young adults helping out in mission work. He was always going on out mission trips and helping out and driving the bus and building houses."

Youth in Mission makes all their funds selling wristbands and the proceeds go to sending young people on mission work worldwide. Pip stated, "The goal of the organization is to get kids who want to serve and want to go and help people to get them over there… and have them not have to worry about making money and not have to worry about how they're going to do it. And just go and do and just help. That's our end goal of all of this. It's only been around for about a year so we're still getting up on our feet. The show has been a great proponent on getting me more publicity for this."

Pip's single "Who Cares" is available now on iTunes. You can also watch the accompanying lyric video on YouTube. And find out more about Youth in Mission at Pip's website.