Jack McBrayer and Robert Carlock Discuss the End of 30 Rock 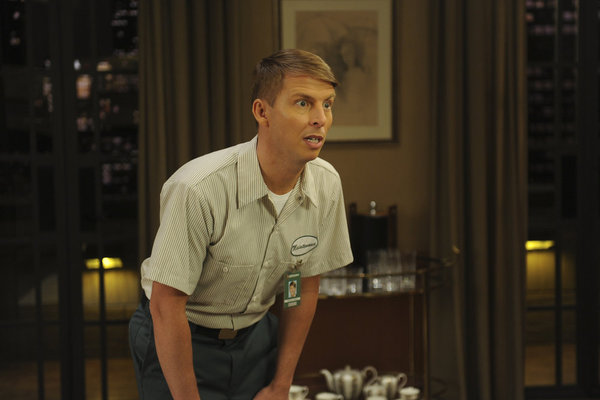 This season will, sadly, be the last year for 30 Rock. And to make matters even worse, it will only be 13 episodes long. No more Liz Lemmon. No more Jack Donaghy. And Kenneth the page, we’ll miss you most of all. We spoke to Jack McBrayer, who plays Kenneth, and the series’ Executive Producer Robert Carlock in a recent conference call interview about the end of the sitcom and what it’s like on set.

Robert said that for now it’s business as usual. He stated, “We always have our head down and do the work, it hasn't yet sunk in. In those last couple episodes maybe people will start to act out and pick fights to make breaking up easier. But so far we're trying to do just normal 30 Rock stories and while at the same time driving towards endings for everybody, so there's a lot that we're trying to take into account. But in terms of the day-to-day, we're used to always feeling like tomorrow's going to be the last day, so it hasn't felt too different.”

Jack chimed in “That is true. But it is weird knowing that there are finite episodes. To me it feels like your senior year of high school where you're having fun and it doesn't matter. I already got into college and things don't matter. But there on graduation day, you're going to be choking back tears and hugging people that you never even spoke to. But it has been great fun and business as usual so far but towards the end it's going to get real emotional.”

Robert recalled that his favorite memories of working on the show has been the guest stars including “working with Bryan and Catherine [O’Hara]. We just shot a thing today where Kellan Love from Twilight plays a character. This show is so fun just because there's these constant things. We had Muppets come and we had Elvis Costello and then all those musicians come one year and there's so many weird things that have happened and every time you say, ‘Okay I can retire happy, my comedy life can end and I'll be able to say I did that.’ It's hard to choose just one.” He also noted that one other stands out, “Buzz Aldrin… just for sheer weirdness of it. Having Liz Lemon and Buzz Aldrin yelling at the moon together was certainly a highlight for me.”


Jack commented on the guest stars as well. He counts among his favorites Katherine O'Hara, Bryan Cranston and Tim Conway, “[He] was a biggie for me. I love that dude, but we're buddies now.” He continued, “Being that we've gone so long and we've had so many amazing guest stars and storylines, and everyone has been onboard, everyone has been game. People you would not expect to say yes to this kind of stuff. It's very flattering for all of us that they would join us for this nonsense.”

But Jack has something else he recounted as his favorite times on the set. “We would have this Halloween party every year and it's real fun because everybody's kids would come and there would be little costume things and they would set up little trick or treat things and a fake graveyard and that has been a real marker for me of just seeing how long the show has gone and how long people have been onboard. Because when people started they had infants and now you're watching these seven year olds walking around in their  Pokemon outfits or whatever seven year olds do. But it has just been crazy to watch the progression of time from that perspective, too. Because time marches, closer to my death.”

While no one can imagine Jack doing anything other than Kenneth, we’re sure the actor will go on to do more incredible work. When asked what his post-30 Rock plans are he answered, “That is a very good question. I have to say I am a fan of television, my concern is what is the future of television right now. The good news is there's so much great stuff on all these cable channels but I know that I do prefer comedy and the bar has been set pretty high for me just working on 30 Rock for seven years. So I have to be prepared for the next thing to maybe not live up to expectations creatively, but of course make it work. But I think in a very general sense I want to work on fun projects with fun people. Now whether that's movie or film, I'm down for anything. Really and truly I just enjoy the work.”

As for whether or not we might get a last minute reprieve and get an eighth season, Robert said don’t hold your breath. “We always thought creatively it would be around seven or eight. The one thing that Tina and I said from the beginning was just let this end on our own terms. The fact that we're doing that at the end of seven years, slightly truncated seven years, is all we could ask for.

Jack interjected, “Plus considering that I have been expecting this show to end immediately since Season 1, it is a miracle that it's lasted as long as it has.”