Morgan Fairchild Looks Back at Mork and Mindy 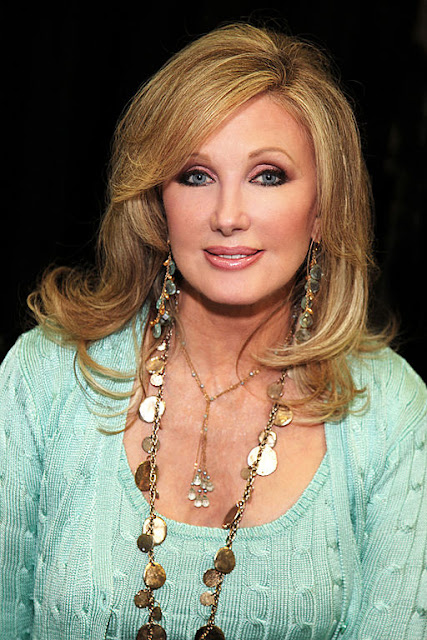 Last night Morgan Fairchild took her usual bad girl roles to a whole new level, playing a sorority housemother with supernatural powers in the Syfy movie American Horror House. Now 40 years into a career packed with over 100 credits Morgan has appeared in everything from Battle of the Network Stars to Beverly Hills Chihuahua. But when she first hit Hollywood she was taking bit parts in TV shows like Kojak and Switch. In a recent conference call interview she talked about her turns on a couple of iconic ‘70s TV shows. Here’s what she had to say:

“I loved doing [Mork and Mindy]. Again I love doing things that catch people off guard. I hadn’t been out here very long. My second or third job was Happy Days…  That was such a wonderful show and everybody was so sweet.

“And so whenever I’d be over at Paramount for anything, I’d stop by the set and say hi. So I’m over there one afternoon and Henry Winkler says, ‘Do you have to go somewhere?’ and I said, ‘No. Why?’ And he says, ‘Stay for a while and watch this kid work.’ So they had a guest star that was doing all this weird stuff and just brilliant.

“So I stayed the rest of the afternoon just so I could tell this guy that he was a genius. And tick, tick, tick like eight, nine months later I get a call from my agent and he says, ‘Good news and bad news.’ I said, ‘Well what’s the good news?’ He says, ‘Well you got this TV movie that you wanted.” Great.

“I said, ‘What’s the bad news?’ and he says, ‘Well Gary Marshall has this new series he’s doing and nobody knows anything about it. It’s all under wraps and he doesn’t want to give you a contract and they don’t want to pay you that much. You’re making a lot more money nowadays and we don’t think you should do it.’ And I said, ‘Well what’s it called?’ and he said, ‘Mork and Mindy,’ and I said, ‘Mork and Mindy, that’s Robin Williams’ show.” And said, ‘Who’s Robin Williams?’ I said, ‘Don’t tell Gary. I would work for free to work with Robin Williams. I don’t care if I have a contract. I don’t care if it’s top of show. I will go do it.’

“And I got over there and of course Robin had been the one I’d seen a month before working on the Happy Days set. And we started off and you could see Robin looking at me like, ‘Why did they send me Ms. White Bread America?’

“And so we did the read-through and then blocking. We get in on a stage and start figuring out who’s going to stand where and what we’re going to do and all of that. And so I quickly realized that what everybody did was just stand back and let Robin go because Robin would not stick to the script. So Robin would take off and do all these rips on everything. And then when he’d slowdown and run out of material, that was when the director would say, ‘Well let’s get back to the script.’

“And so that was what we would do. We would improvise a lot of the stuff because that’s the way he worked. But a lot of the people didn’t know what to do with him because nobody had really seen anything like Robin. Now people are used to Robin, but back then people weren’t really used. I love to be part of anything that’s cutting edge, that’s new, that’s different, where you can sort of exercise your chops and stuff.

“Well Robin had gone to Julliard with my sister and Christopher Reeve had also been in the class behind my sisters. And they were buddies, so Chris would come hangout on the set and I had known Chris in New York. We had the same agent and we’d frequently audition together. And so it was a group of friends.

And so, yes, [it was] fun learning from him but also feeling that you are contributing because you’re the only one doing it with him — what he likes to do, which is do the improvisational thing. And he’s very fast. You have to be very on top of things to keep up with him. He’s very smart.”