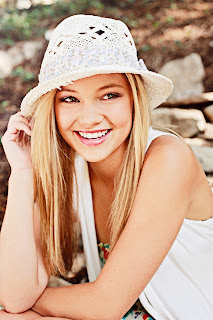 Tonight the new Disney Channel movie Girl Vs. Monster premieres. It stars Olivia Holt who most know from the Disney XD series Kickin' It. In a recent exclusive interview Olivia talked about the new movie due out just in time for Halloween.

On Her Girl Vs. Monster Character
"My character is Skyler Lewis who on Halloween finds out that she's a fifth generation monster hunter. And on Halloween night she has plans to go to this party with a guy she likes and have a great time and her parents are making her stay home on Halloween. And she wants to escape the house and sneak out. So she ends up sneaking out of the house but accidentally releases all of the monsters her parents and ancestors have gotten over the years. It turns into this chaotic, hectic Halloween night where her and her friends have to save the Halloween day and capture the monsters. And the big monsters are out for revenge on her and her parents. It's pretty crazy."

On What Drew Her to the Movie
"What I love about it is there's message about facing you fears and how to overcome them. I was really interested in the script. The first time I read it I was balling my eyes out because I thought it was so cool. It got to me. I actually felt the character and when I went to the audition I told them how much I loved this role and that Skyler was such a powerful, confidant and strong girl. I feel like so many girls can look up to her."

On How Kickin' It Helped Prepare Her for Girl Vs. Monster
"In Kickin' It it's more martial arts and I didn't really have to do any martial arts in this film. But all the training for it and all the the hardcore work that we put in to it, it definitely paid off when I did the film."

On Working with Her Girl Vs. Monster Co-Stars
"I can not ask for a better cast. The day that we all first met we all just clicked. Spending two months together it was incredible. They're all so nice and talented. We all got along so well and I made some lifelong friends on that set… I was really happy to be able work with such incredible people. They're all so focused but at the same time just love to have a good time… Every night we'd go out to dinner or me and some of the kids in the cast, we stayed in the same hotel, so we were playing hotel tag. We were all so crazy. We all love to have a good time. And we'd get all of out families together and we'd play games."


On Her Music Career
"I'm really looking forward to being able to share my music with everyone, because music has been a passion of mine for a really long time and being able to put out my music and share with everyone my story that would be really cool. That's why I really want to get into writing my own music and if I get to put out an album soon that would make me so happy. I really hope that people enjoy the music because it inspires me and I hope it inspires other people."

On What She's Most Passionate About
"I'm most passionate about my family. Sometimes I'm working too much and I don't really get to see them as often as I would like to. When I'm with them it feels so great to be around them and I'm really lucky that they sacrificed so much for me and I can't thank them enough for all that. Being with them, when I'm not working, we have such a great time and I really absolutely love being with them. It's really cool that they've given up basically their life for all this."

Watch Girl Vs. Monster on Friday October 12 at 8 p.m. EST/7 p.m. Central on the Disney Channel.


The Cast of Kickin' It Talks About Their Characters


Dylan Riley Snyder and His Bag of Tricks